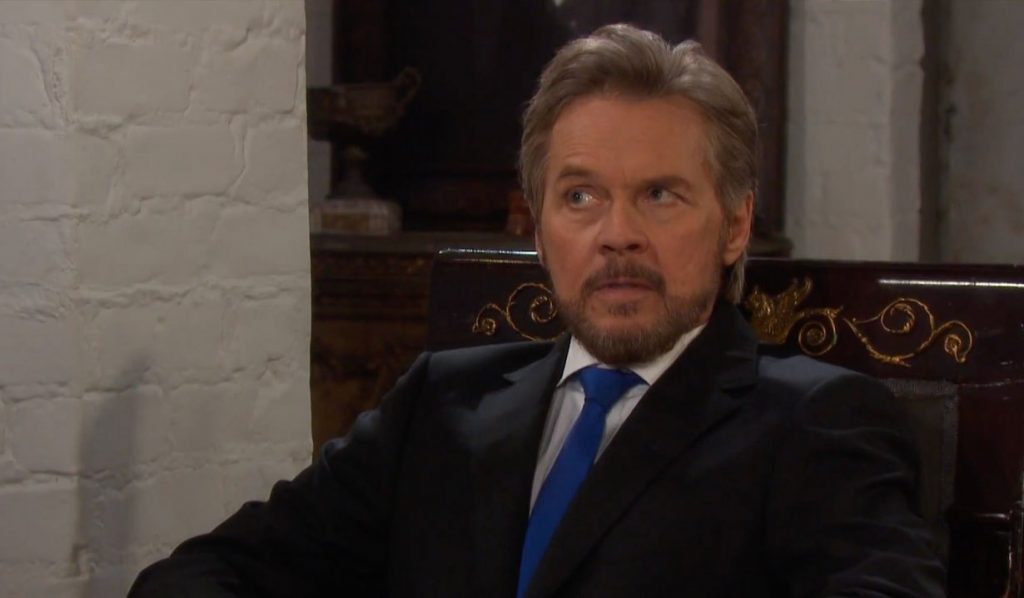 “Stefano DiMera” Is Tired Of Being Cooped Up, “Hope Brady” Has A Suggestion

Stefano DiMera, in Steve Johnson’s body, gets tired of being cooped up on New Year’s Eve, and “Hope Brady” who has been brainwashed through a control chip Stefano implanted into her brain years ago, has been “Princess Gina Von Amberg” for over a year now, thanks to Dr. Wilhelm Rolf (William Utay) implanting what apparently was some type of upgrade for the control chip in her neck. She tells Stefano, why doesn’t he go to the New Year’s Eve party that Doug and Julie Williams (Bill and Susan Seaforth Hayes) are holding at “Julie’s Place”, formerly “Doug’s Place”. She tells him to wear a patch over the appropriate eye and go as Patch! He probably won’t be wild about the idea, but it beats dressing up in Roman Brady’s (Josh Taylor) Santa suit like he did at Christmas!

Stefano DiMera Goes To The Party As Patch Johnson

Stefano goes to the party as Patch Johnson, and as he loudly announces “I’m back!” there are looks of shock and total surprise, especially from Kayla Brady, (Mary Beth Evans) who is there with her new love, Justin Kiriakis (Wally Kurth)! John Black (Drake Hogestyn) and Marlena Evans (Deidre Hall) are with Justin and Kayla when “Steve” makes his big announcement, and John looks as shocked as anyone else! Steve had been his partner in his private investigator company, “Black Patch” and knows Steve pretty well! Almost immediately, Justin gives “Steve” a dressing down, letting him know in no uncertain terms that he and Kayla are now a couple, and rips into him for not attending his own sister, Adrienne Kiriakis’ (Judi Evans Luciano) funeral! All of Steve’s friends are wondering how he went from nice guy to jerk so fast!

Stefano can’t believe his good fortune when John and Marlena invite him to stay with them at their home, meaning he is closer to his dark queen than ever! Stefano wants to be with Marlena so bad he really isn’t thinking things out, not realizing that John will see that this person isn’t the Steve Johnson he knew for years in a heartbeat! He is willing to risk everything to be near “his queen”! Stefano had better know a whole lot about Steve to be able to pull off playing Steve, including actions, mannerisms, and memories! There is much more to impersonating someone than just looking like the person, and even Princess Gina has drawn suspicions from Hope’s family and friends, and she’s been impersonating her for over a year, although actually in Hope’s body, as Stefano is in Steve’s.

Kayla Brady Follows “Steve Johnson” And Rips Him To Shreds

Kayla, meanwhile, has found herself not being as over Steve as she thought she was, and follows him to John and Marlena’s, where she proceeds to verbally rip him to shreds over how he has treated her! She starts with his lack of communication for over a year, and then how he signs the divorce papers with no problem, and wants to know what happened to him? Where is the man she loved for so many years, who used to call her his “sweetness?” Everything she has held in since Steve stopped communicating with her comes out, and all she gets is a cold response from “Steve” telling her she isn’t the reason that he came back!