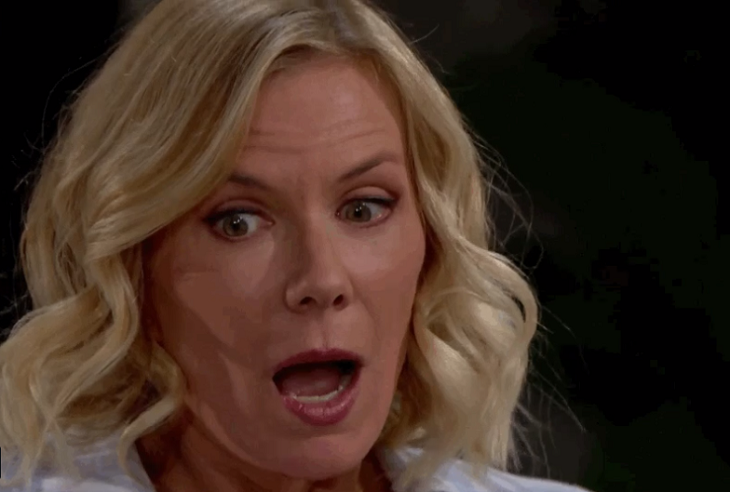 Brooke Forrester (Katherine Kelly Lang) doesn’t realize the forward momentum she’s created on the Bold and the Beautiful. While her intention is to snuff out any spark between Hope Spencer (Annika Noelle) and Thomas Forrester (Matthew Atkinson), she’s actually furthering Tope’s potential.

This teased storyline is emerging due to the fact that Brooke is scared that her daughter and Thomas might bond. Lang’s alter ego isn’t concerned about Hope and Douglas (Henry Joseph Samiri). She knows their affection was built from the recent, personal losses each suffered.

After ragging on Taylor Hayes (Hunter Tylo) to her husband, for what felt like the nine millionth time in B&B’s history, Ridge Forrester (Thorsten Kaye) felt obligated to raise the non-existent issue with his son. He introduced the idea to Thomas, who was surprised at the suggestion and assured his father that he wasn’t mixing Douglas’ best interests with ideas about Hope.

If Brooke hadn’t gone back and forth with Ridge about the matter, he likely never would have mentioned it. Brooke’s persistence served, in that instance, to use her husband as an information delivery system that has now begun to seep into Thomas’ consciousness.

Bold And The Beautiful Spoilers: Flo Kisses Wyatt – Are Sally And Wyatt In Trouble?

Sure, it’s possible, based on all circumstances and history for Thomas and Hope to have considered each at some future point. But it’s now arguable that Brooke became the trigger that made Thomas, if not also Hope, entertain the possibility, when each person may never have done so otherwise.

The clear tease is that Douglas has formed a genuine bond with Hope. What little boy who’s lost his mother and then came to know Noelle’s endearing character wouldn’t do the same?

Taylor, sensing an opportunity for Steffy Forrester (Jacqueline MacInnes Wood) to reclaim her marriage, is aware of Hope and Thomas’ history and potential. She, like anyone, can also see that Hope and Douglas could be good for each other.

Combine the above with Hope’s recent suggestions that Liam Spencer (Scott Clifton) should be with Steffy and the girls. No, Taylor isn’t the issue. It’s Brooke, again.

Soap Opera Spy is a leading source for everything linked to the Bold and the Beautiful.