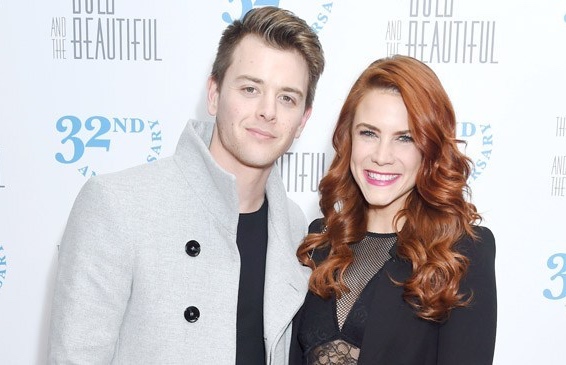 Chad Duell and Courtney Hope were not able to have a love story onscreen of “General Hospital” as Michael Corinthos and Sally Spectra, but their relationship in real life has been going strong. The couple shared a bit of their love story in an interview with Soap Opera Digest.

GH Spoilers: Chad Duell And Courtney Hope Were Not Able To Have A Love Story

Chad and Courtney met at a party in Los Angeles when Bryan Craig (ex-Morgan Corinthos) introduced them to each other, which is how they started chatting. They immediately found common things about them, and they enjoyed each other’s company.

But before they could exchange their numbers that night, their friends had pulled them in different directions. But Hope reached out to Duell on Facebook, only to keep her distance a bit later because she knew was going to be testing as Michael’s love interest on GH.

“I didn’t want to be working with him and starting a relationship; that is just not really who I am,” she revealed. But after talking more later, Duell invited Hope to hang out and that’s when she realized that she really likes him.

It was when Hope’s test didn’t work out that she felt she can pursue Duell and vice versa. “It seems like it would put a weird pressure on the beginning of a relationship to also be co-workers,” Chad added.

Now, the couple has more than three years of being in a relationship as their foundation. They have similar personalities and values, which work for them. They also enjoy each other’s company, and moving in together has been easy for them because of their compatibility.

“He’s definitely my best friend. He’s an amazing boyfriend, but he’s also a really, really good friend, which I think is the most important, in my opinion,” Courtney said. “I just feel very thankful that we met each other and feel very lucky that it worked out. I love him with all my heart.”

“She’s my best friend, too,” Chad said. “Obviously, it’s very important to get along, and we do very well. I enjoy making her laugh; she makes me laugh. We both are very good dog parents. And I like her family as well, which is also a bonus. And she’s beautiful, as well.”