Cameron Webber (William Lipton) sings and accompanies himself on guitar with little brothers Jake Webber (Hudson West) backing him up with rhythm via a shaker, and Aiden Webber (Jason David) stands with him for moral support and cuteness. 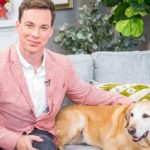 Cam, Trina, and Josslyn apparently hear something as they turn around and look, and Bobbie nervously looks around a corner as well; Franco and Liz look around and Liz exclaims “OH MY GOD!” as Liesl falls overboard drunk as a skunk and a lovely pair of legs walk down a staircase! General Hospital viewers want to know, is that Hayden Barnes (Rebecca Budig)?

Will former Navy Seal Drew’s instincts kick in and will he rush out and save Obrecht from drowning? Another question is WHERE’S VALENTIN? Why wasn’t Valentin with Nina and Obrecht in the ballroom? Well, maybe he just wasn’t invited, although it doesn’t make any sense for Franco and Liz not to invite Valentin if they invited Nina, especially with Jax lurking about!

Days of Our Lives Spoilers: Tensions Mounting Between Jack And Eve – Awkward Convo With Haley And JJ Seals The Deal