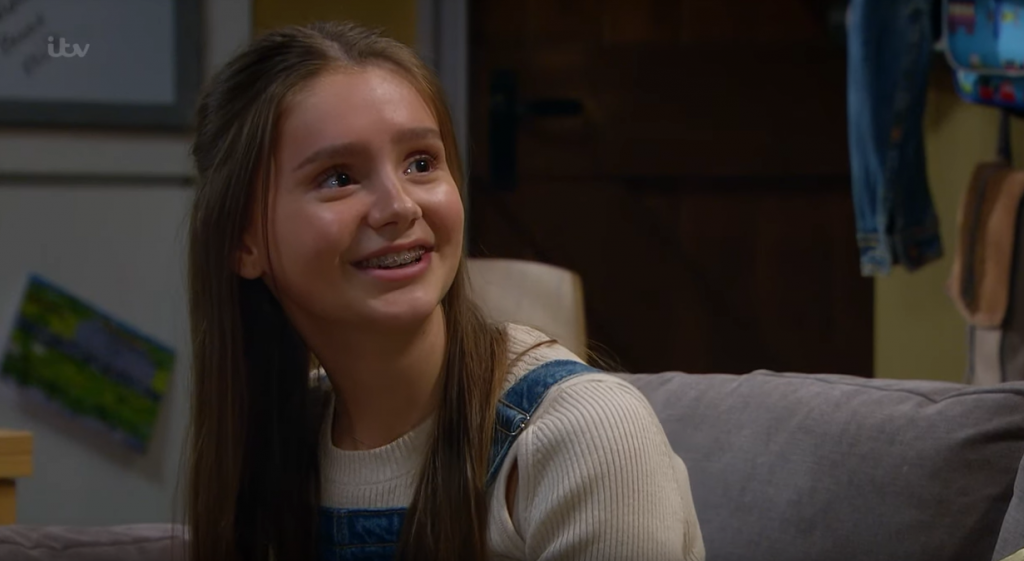 Emmerdale spoilers reveal Sarah Sugden (Katie Hill) faces temptation and making another bad decision. Trying to impress newcomer Danny (Louis Healy), the teen is offered drugs. She swallows a mystery pill. This may have devastating consequences, especially since she has a heart condition and multiple health conditions.

In scenes airing next week, Sarah will once again make a poor choice. As fans recall, she previously landed in hot water for skipping school. She was playing hooky in order to meet up with an older boy, Danny. Once Sarah’s grandmother, Charity Dingle (Emma Atkins) and girlfriend at the time, Vanessa Woodfield (Michelle Hardwick) found out, Sarah got in tons of trouble.

Fans have noticed that recently, Sarah has been more rebellious. Part of this is just her age. After all, many teenagers try to test how far they can go. However, the other part of Sarah’s defiance and risk-taking has to do with her fragile life.

Emmerdale spoilers indicate that Sarah worries that she won’t live very long. The teenager has multiple health issues, including a Fanconi anaemia, a rare genetic disease. She has also been the recipient of bone marrow and heart transplants. If all that is not enough, she was also diagnosed with throat cancer. She knows that her life is not guaranteed and wants to live life to the fullest.

In fact, she feels so strongly about enjoying life while she can that she had to beg Charity and Vanessa to lay off. She wanted to be a normal teenager and felt that the couple known as “Vanity” was restricting that. Eventually, they eased up on Sarah, but they may end up regretting that decision.

On Tuesday, November 19, Sarah throws a party so she can impress bad boy Danny. She invites him, as well as his buddy, Jayden. Noah Tate (Jack Downham) also shows up. During the party, Danny offers Sarah a mysterious pill. Wanting to be part of the group and to look good in his eyes, she takes the pill and swallows it without even knowing what it is. Noah sees the whole thing and is horrified at Sarah’s risky behavior.

Not only is taking drugs dangerous, especially when you have no idea what the pill is, but Sarah’s situation is special. Due to her multiple health issues, specifically the heart problem, the drug could have alarming and perhaps even fatal consequences.

It is understandable that she wants to fully enjoy every experience life has to offer. Considering that she worries about not living very long, she wants to have no regrets. However, living life to the fullest is not quite the same thing as putting yourself in harm’s way, which could end her life even sooner.

Plus, if Danny had any real interest in her, the young man would not put her life in jeopardy. Rather, he would do everything he could to protect her. There is no doubt that he is a bad seed. Sarah should extract him from her life before he causes the end of hers.

What do you think is going to happen with Sarah? Will she suffer consequences after taking a mysterious drug? How will her loved ones handle Danny? Fans will have to keep watching the soap opera to see how this story unfolds.