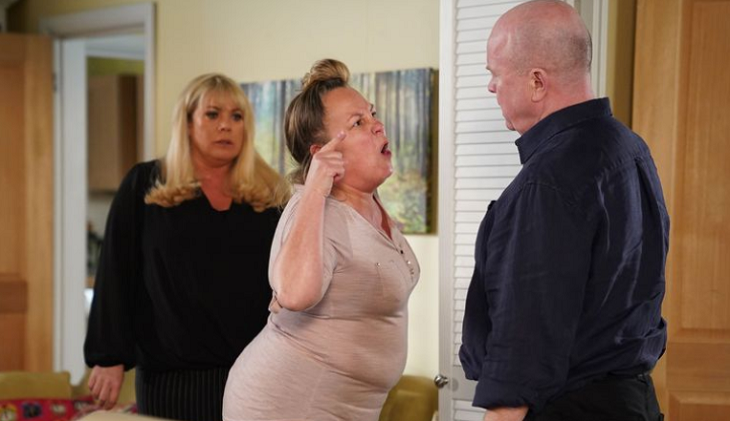 Tension is brewing up in EastEnders as the Taylors and the Mitchells are set to clash in the show’s Friday episode. The argument will be triggered by Dennis Rickman Jr. (Bleu Landau) who plays a joke on Karen Taylor’s (Lorraine Stanley) boys. When she finds out, she heads off to the Mitchell’s for a confrontation.

This doesn’t sit well with Phil Mitchell (Steve McFadden), causing the tension to escalate further. Karen’s son-in-law Gray Atkins (Toby-Alexander Smith) steps in for her, leaving the two face to face. Will this confrontation lead to a physical altercation?

Viewers of “EastEnders” may recall that Karen has been wanting to find a way to confront the Mitchells about Sharon Mitchell’s (Letitia Dean) affair with Keanu Taylor (Danny Walters). This Friday’s showdown could pave the way for Karen to finally talk some sense to Sharon or even tell Phil about what his wife has been doing behind his back.

EastEnders Spoilers – Major Drama Once The Affair Is Revealed

Lorraine Stanley, who plays Karen, hinted that there will be a major drama once the truth about Sharon’s affair with Keanu comes out. Of course, Phil will be part of the climax and when it happens, “there would be some brilliant scenes” and it would be “explosive.” 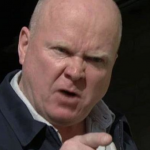 EastEnders Spoilers: Phil Goes On A Rampage After Keanu Gets His Wife and Daughter Pregnant

Things could also go from bad to worse once Karen finds out that the affair is back on as Sharon and Keanu recently gave into temptation.

“She (Karen) doesn’t mind Louise. Obviously Louise is part of the Mitchell family, but Keanu could do a lot worse than Louise. So I think she’s happy with that scenario,” Stanley said. “So if Sharon comes in and messes everything up, I think Karen would go in all guns blazing.”

Additionally, the situation is bound to become more complicated as Louise Mitchell (Tilly Keeper) recently found out that she is pregnant with Keanu’s child. However, the two aren’t on good terms after Louise found out that Keanu was paid by her father, Phil, to be with her. Feeling betrayed, Louise lied to Keanu that she had her pregnancy terminated.

Meanwhile, Keanu drowns his sorrows at the Queen Vic when Sharon arrives to talk to him. She confesses that she brought Louise to the abortion clinic and that the latter already knows his deal with Phil. This frustrates Keanu even more and he storms out of the pub.

Karen’s an expert at barging into the Mitchells. Only this time, she has backup. #EastEnders. Tonight. 8pm. pic.twitter.com/ktynK4HfP0

Sharon manages to convince him to talk things over at The Arches, where the two ended up sharing a passionate kiss. The intimate night they shared together may have gotten Sharon pregnant. If Phil finds out about this, things are bound to get ugly.

Coronation Street Spoilers: Nick Targets Shona – Is She In Danger?