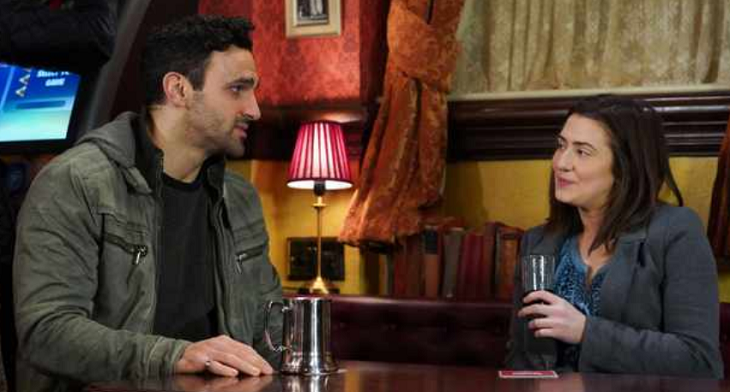 EastEnders spoilers indicate that things are going to get pretty dramatic now that Bex Fowler (Jasmine Coral Armfield) has made her move on her father’s best friend, Kush Kazemi (Davood Ghadami). As a matter of fact, many EastEnders fans don’t think any good will come out of this! Here’s what you need to know.

Kush was left in shock when his best friend’s teenage daughter Bex passionately kissed him during Thursday night’s episode. Many fans know that Bex has been harboring some feelings for Kush after the two started to spend more time together.

Unfortunately, when her father Martin Fowler (James Alexandrou) finds out about this, he will be less than pleased, to say the least.

Bex recently helped Kush sell some fur coats from his stall in the Square. The handsome lad in turn has also proved himself to be a good friend to her. She’s been opening up more and more to him, and even told him all about the anxiety that she’s been feeling about trying to get into a good university.

EastEnders Spoilers: Linda Wants To Kick Jean Out Of The Queen Vic

During Thursday night’s episode, poor Bex was left alone when her best friend Louise Mitchell (Tilly Keeper) ghosted her during what was supposed to be a late night out together. This left Bex to spend some more time with Kush at E20.

The two began their night by getting nostalgic and talking about Shakil. It didn’t take very long for her to make her move. And before Kush realized it, they were about to make out. However, the moment she leaned in for a kiss, he recoiled.

EastEnders Spoilers – Is Bex Fowler Setting Herself Up For Trouble?

It looks like both Bex and Kush will try to make some sense as to what happened between them in the coming weeks. Tell us, do you think Bex is setting herself up for trouble? Let us know by leaving us a line in our comments section below. EastEnders airs weeknights on the BBC. Check your local listings for times.

MUST WATCH #EastEnders Explosive Spring Promo: Tiffany&#8217;s Family Take Matters Into Their Own Hands &#8211; Phil&#8217;s Past Haunts Him @SoapOperaSpy https://t.co/fRx8VDy754

And as always, come back to Soap Opera Spy for all the latest news, updates and spoilers on EastEnders, Coronation Street and all of your favorite daytime and British soaps right here!

Bold And The Beautiful Spoilers: Quinn And Flo Get Chummy, Sally Feels Insecure – Will She Lose Wyatt