EastEnders Spoilers: Jack Branning Out For Revenge On The Man Who Raped Tiffany Butcher

On EastEnders, Jack Branning (Scott Maslen) will take matters into his own hands as he believes the man who raped his niece Tiffany Butcher (Masie Smith) will never pay for the crime he committed.

Although he reluctantly agrees to Tiff’s plea to drop the matter, Jack struggles to keep his word when he accidentally runs into Fraser (Shanu Hazzan) in the park with children Amy and Ricky. He talks to Muski (Patrick Cremin) about Fraser. However, he remains unsatisfied with the responses he gets and decides to give the criminal the justice he deserves. Will Jack end up killing Fraser?

Viewers of EastEnders may recall that Tiff admitted to Jack that she was sexually assaulted by members of the drug dealing gang that she was coaxed into joining by Evie Steele (Sophia Capasso). Her uncle was the only one who knew about the crime as she decided not to get the police involved in the matter. 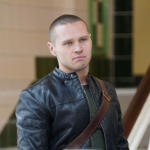 As she tries to get her life back, her nightmare resurfaces when her attacker, Fraser, was recently spotted in town. After confronting the man who raped her, Tiff has decided to move on with her life and convinced Jack to drop the matter.

Will Jack Go To Jail IF He Attacks Fraser On EastEnders?

Jack is worried as to how Tiff is coping with Fraser’s reappearance in the Square. He becomes more desperate to get justice for Tiff after meeting Fraser in the park. He then checks in with Muski and asks if there’s anything the police can do. However, Jack realizes that he’s at a dead end. He refuses to accept that Fraser may get away with his crime. He decides to take matters in his own hands and follows him.

Spoilers reveal that Fraser and Jack are bound to meet again and the situation will escalate. What will Jack do? The recent summer 2019 trailer released by EastEnders showed Jack being taken away by the police while Tiff looked on as her uncle was being apprehended.

Will Jack be sent to prison? Will Tiff be forced to report the crime to the police so she can save her uncle? Apart from his problems with Fraser, Jack also has to deal with his ex-girlfriend Mel Owen (Tamzin Outhwaite) as she plans to betray him by stealing all his money.

The Young And The Restless Spoilers: Is Mishael Morgan Returning To Y&R In A New Role?