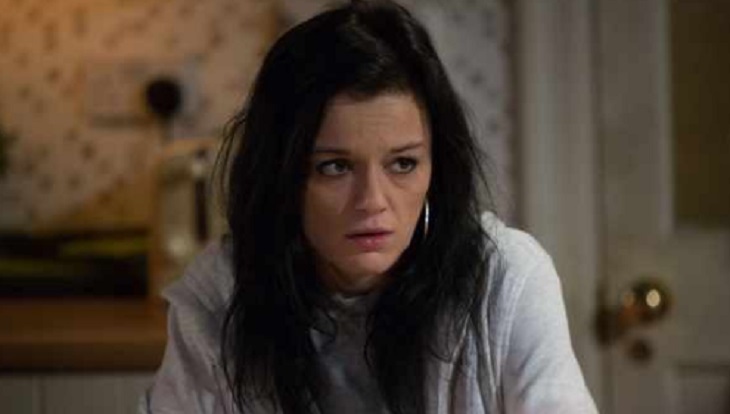 EastEnders spoilers show that Hayley (Katie Jarvis) has been through a lot over the past few months. She’s under pressure to prove herself as a mother while learning the ropes of having a child. Things are set to go out of hand this week as Hayley fears that everyone disapproves of all her efforts.

EastEnders spoilers reveal that Alfie Moon (Shane Richie) receives an olive branch from Kat while preparing for Kat’s early birthday lunch. He also feels delighted when Hayley allows Cherry to go with him. Later at the Queen Vic, Alfie dedicates a heartwarming speech to Kat during the family gathering.

Just when things seem to go well and everyone is having fun, Alfie receives a call, which forces him to leave. Soon after, Alfie faces the Slaters, who are all furious when they discovered Alfie’s scams, leaving Kat shocked at the revelation.

While everything was in chaos, Hayley runs off with Cherry after overhearing Kat say that she may not be able to handle motherhood. Hayley doubts herself more after coming across Max Branning. Will the current situation be the last straw for Hayley? Will she give up or will she forge ahead?

Can Hayley ever escape her demons? #EastEnders pic.twitter.com/AteSjIlKf8

Meanwhile, Bernadette and Tiffany’s friendship is on the rocks after arguing about the latter’s involvement with Evie. Bernadette tells Tiffany that Evie conspired to have her arrested when she ordered Rat to put the drug on her bag.

EastEnders Spoilers – Trouble Ahead For Tiffany And Bernadette

She wanted Tiffany to realize what Evie is capable of and suggested that they turn her to the authorities. But that was not the case. Instead of siding with Bernadette, Tiffany snaps at her and says some harsh words, saying that she shouldn’t have gotten involved in the first place.

Evie is on a mission to teach both girls a lesson. Bernadette got on her bad side when she lied about Tiffany’s whereabouts. Meanwhile, Evie is mad at Tiffany for not following her orders. As a result, she’s demanding more from her, which includes recruiting Dennis as Rat’s replacement.

This Is Us Spoilers: Susan Kelechi Teases Randall And Beth’s Future