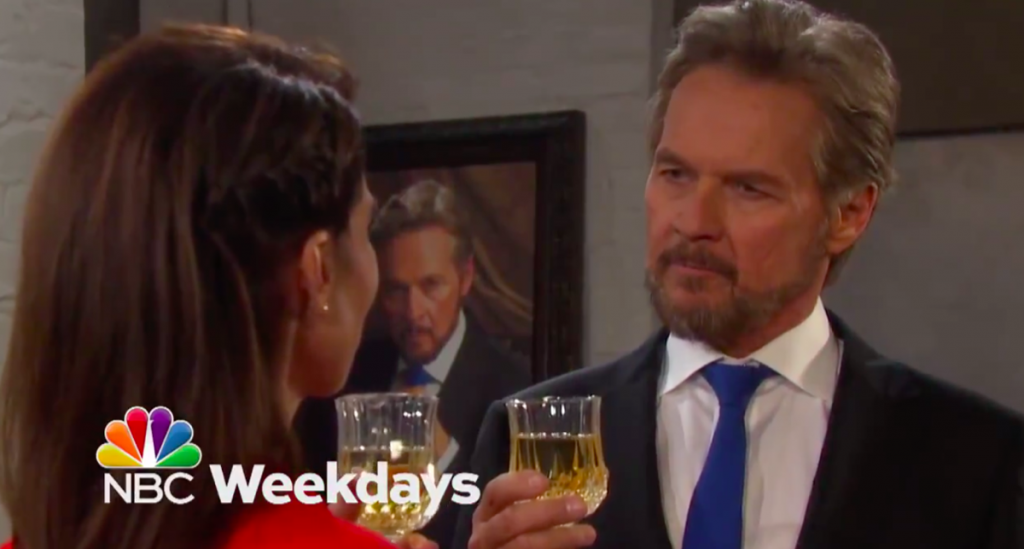 Days of Our Lives Weekly Preview: Stefano Is Alive – The Phoenix Always Rises From The Ashes!

In the Days of Our Lives weekly preview, Princess Gina (Kristian Alfonso) uncovers the new portrait of “Steffy” she has been working on so that he can see it. The portrait is unveiled to show the new Stefano DiMera (formerly the late Joe Mascolo) to be Steve Johnson (Stephen Nichols)!

He looks in the mirror and says “I now have Steve Johnson’s face!” Gina asks him about his new plan, then the scene shifts to a serious looking Marlena Evans (Deidre Hall) questioning, “Stefano?” Stefano and Gina share a drink as Stefano remarks, “It’s good to be back!

Monday, Justin Kiriakis (Wally Kurth) and Dr. Kayla Brady (Mary Beth Evans) take a huge step as they decide to move in together. They figure it’s time since their friends and family have accepted their romantic relationship. They will live in Kayla’s new condo. Ciara Brady (Victoria Konefal) updates Ben Weston (Robert Scott Wilson) on the status of her investigation into the possibility that Xander Kiriakis (Paul Telfer) and Victor Kiriakis (John Aniston) murdered Ben’s sister, Jordan Ridgeway (Chrishell Hartley) and framed him for it!

Days Of Our Lives Spoilers: Ben Weston Tries To Protect Will From Clyde – Ciara Breaks Into Xander’s Metal Suitcase

Tuesday, Ben tries to protect Will from Clyde as they get into a fight! Clyde has a knife in his hand as Ben tries to overpower his father! Meanwhile, back at the Kiriakis Mansion, Ciara finally successfully breaks into Xander’s metal suitcase!

She hopes to find evidence of his and her grandfather Victor’s collusion to kill Jordan and frame Ben. Also on Tuesday, Nicole Walker (Arianne Zucker) and Brady Black (Eric Martsolf) comfort one another, Ciara makes a move against Xander, Nicole begs Eric Brady (Greg Vaughan) to forgive her and Evan Frears (Brock Kelly) kisses Sonny Kiriakis!

Wednesday, Kate Roberts (Lauren Koslow) takes on a new career path as a waitress at Brady’s Pub! To say she is overqualified is a gross overstatement, but then maybe Chad DiMera (Billy Flynn) didn’t want her at DiMera and Victor wouldn’t take her back at Titan! A girl’s gotta eat, after all! Lani Price (Sal Stowers) reaches out to her father, Abe Carver (James Reynolds) and reveals she has made a commitment to God as a nun.

Thursday, Eric introduces Mickey Horton (the May twins) to John and Marlena, and Jennifer recalls the moments before her fall. Also on Thursday, Hope offers resistance when Abigail asks to look into Jennifer’s case, Sarah Horton (Linsey Godfrey) tells Xander that Eric is willing to share custody – but on one condition; and Rafe Hernandez (Galen Gering) questions Hope’s behavior.

Friday, JJ trails Eli to Rome, thinking that he may find Kristen if he follows Eli; and Marlena tells Eric that baby Mickey has a fever. Also on Friday, Lani comes face to face with Eli, JJ confronts Kristen, and Gabi and Chad go head to head for control of DiMera.

General Hospital Spoilers: Will Julian Turn Himself After Alexis Injured In Car Wreck!

Days Of Our Lives Spoilers: Will Hope Leave Salem To Find Ciara? Vincent Reveals Her…