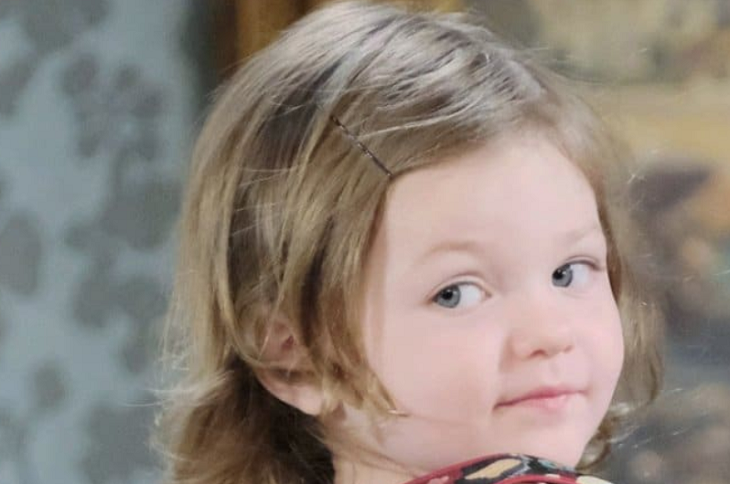 Days of Our Lives spoilers tease that little Holly Jonas (Scarlett and Harlow Mallory) is not really dead. It wasn’t her body that was carried up from the van that went over the cliff. Ted Laurent (Gilles Marini) and Xander Cook Kiriakis (Paul Telfer) faked her death and she is safe and sound!

Days of Our Lives viewers can hand it to Xander, who formulated this kidnapping plan. He may be a lot of things, but he’s not a child killer. And apparently, he’s not afraid of changing diapers, although Holly should be potty trained by now!

Viewers may have feared that Xander was going to kill Holly when they saw the evil glint in his eye while singing “Rockabye Baby” to her when the line “down will come baby, cradle and all” came.

Days Of Our Lives Spoilers – Holly Jonas Used As A Pawn

Ted won’t like Holly being used as a pawn and letting her family think she is dead. But he should be relieved that she’s not. Ted is no paragon of virtue himself, but he’s not a child killer either. He didn’t like the kidnapping idea either but Xander has leverage over him and he had to comply with it.

Days Of Our Lives Rumor: Is Xander’s Other Secret Partner Kristen DiMera?

Days of Our Lives viewers are bound to be asking themselves two questions: what does Xander have over Ted, and why did he kidnap Holly? If viewers are to believe Judith Colville Cooper (Judith Chapman), Ted’s wife is alive and well overseas, although Judith didn’t mention a son.

Maybe Ted committed fraud by raising money for non-existent cancer treatments for a non-existent son. That could get him disbarred and possibly imprisoned. But it hardly seems worth helping fake a toddler’s death over. As far as the reason for the kidnapping itself, if they are faking her death, what profit is there in that?

There is one answer – and one person – who could explain both why Xander kidnapped Holly and faked her death, and what he has over Ted. Perhaps Ted’s previous law experience was in a field not so noble, black market adoptions.

Xander may or may not be going into black market adoptions as a business, but there is someone, also having been presumed dead, who may want a little girl because she had a miscarriage in the past. She has also kidnapped children before – Kristen DiMera (Stacy Haiduk).

Xander and Kristen have been partners in crime together as well, and Days of Our Lives spoilers tease that Kristen is alive and out there!