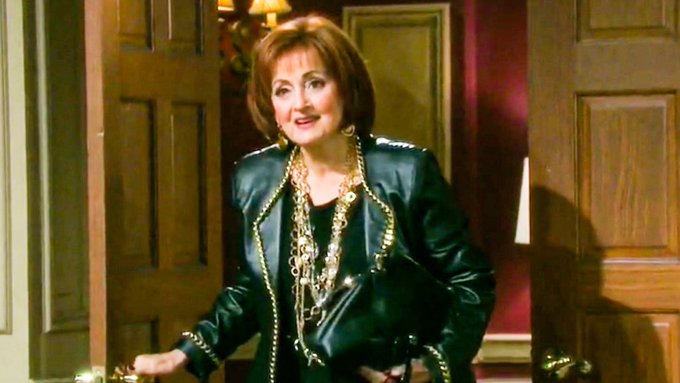 Days of our Lives (DOOL) spoilers tease that tragedy is about to hit Salem yet again. Stefan (Brandon Barash) and Gabi (Camilla Banus) have finally admitted their love for each other and are truly together and happy. But Stefan’s mother Vivian (Robin Strasser) has had murder on her mind and it seems as though her desire for revenge may come at a cost she never expected nor wanted.

It all started because Vivian wanted to kill Kate (Lauren Koslow) for shooting her last year. So far, she has shot Kate, buried her, and cut off her air supply in Kate’s hospital room. Kate has survived all of this but is currently in a coma and cannot breathe without the assistance of machines. But Vivian still wants to finish Kate off, much to Stefan and Gabi’s chagrin!

Gabi wants to turn Vivian into the police and be done with it but Stefan loves his murderous mother and is trying to protect her from the law. After all, he just got Vivian back and to lose her again would be painful. So far Gabi has given in and let it go, but as Vivian grows more and more dangerous, Gabi will make her intentions clear. She’ll likely threaten to go to the police!

Days Of Our Lives: Chad & Abby in Paris– Will Andre DiMera Murder Flashbacks Cause Abigail’s Mental Illness to Resurface?

If Gabi makes her intentions clear, Vivian will likely not stand for it. She would be more than willing to kill Gabi too if her freedom is threatened. She might pull her favorite gun on her daughter-in-law and plan to shoot her. She may think Stefan deserves better than Gabi anyway! But she won’t count on Stefan showing upright as she pulls the trigger. Vivian would be horrified at her actions, as her murderous rampage would cost her the one thing she loves the most!

Stefan would gladly step in front of a bullet to protect Gabi, but knowing his own mother shot him would be too much too bear. Spoilers indicate that Stephan will soon be admitted to University Hospital with grievous injuries. He will likely pass away with Gabi by his side. And Vivian would be broken, taken away to prison, having to live with what she has done.

Days of Our Lives Spoilers – What will Happen?

Will Stefan die at his own mother’s hands? Only time will tell. The next few weeks are going to be full of medical tragedies and triumphs and the best way to see all the dramatic days ahead in Salem is to watch Days of Our Lives, weekdays on NBC!