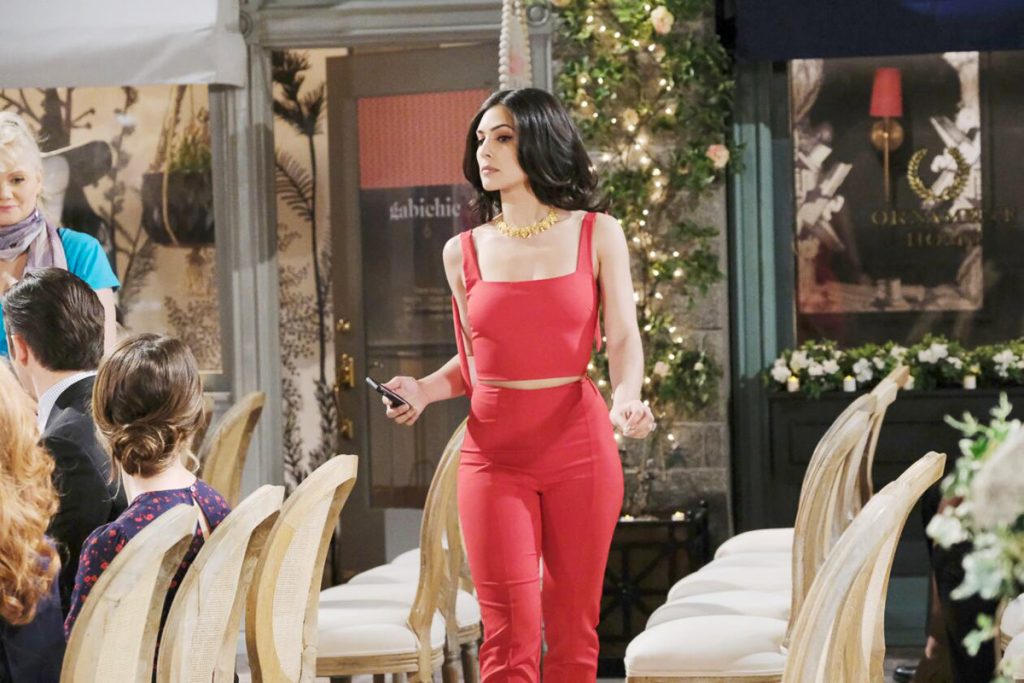 Xander Kiriakis (Paul Telfer) overhears Nicole Walker (Arianne Zucker) telling someone that Eric Brady (Greg Vaughan) may still have feelings for Sarah Horton (Linsey Godfrey). He will needle Nicole about Eric’s feelings and may want to know if Nicole thinks his feelings are a threat to her and Eric’s relationship as well as to Xander’s own chances at moving forward in a relationship with Sarah. Xander is very determined to keep Sarah in Salem and close to him, and Nicole certainly won’t want Eric to gravitate towards Sarah, especially if he were to find out Sarah is pregnant with his baby, which Nicole has promised Xander she would keep secret!

Lani Price (Sal Stowers), who has been blackmailed by Gabi DiMera (Camila Banus) to either dump her fiancé Eli Grant (Lamon Archey) at the altar on the day of her wedding or Julie Williams (Susan Seaforth Hayes) gets her new heart blown up thanks to an app on Gabi’s phone, tries to outmaneuver her. Gabi will likely suspect that Lani is trying to get one over on her and won’t budge, but Lani will continue to try to talk Gabi down and try to get her to change her mind right up to the last minute possible, more than likely!

Ciara Brady (Victoria Konefal) is trapped by Jordan Ridgeway (Chrishell Hartley) at the gatehouse, when she answers the door and finds a trick instead of a treat! Jordan has baby David Ridgeway (Dexter and Jaxton Ellis) with her, and may intend on finishing the job she started when she poisoned the cupcakes! Luckily, Ben Weston (Robert Scott Wilson) who was at Salem University Hospital turning in the little brown cyanide bottle to have it confirmed as cyanide, returns just in time! He now knows his sister is extremely dangerous, because he stopped at Rafe Hernandez’ (Galen Gering) on the way, and found JJ Deveraux (Casey Moss) unconscious on the floor!

Days of Our Lives Spoilers: Rafe Knows Poisoning Was Due to Jordan – How Can He Protect His Loved Ones From Crazy Ex-Girlfriend? @celebratesoaps #days #dool #daysofourlives https://t.co/LnUDmeHZZ1

Jordan, who knows that she’s been busted, scrambles out the door with David after being interrogated by Ben about the poison and Rafe’s having been diagnosed with having been poisoned by cyanide, and Ben takes off after her. After some time he returns, and he has David, but no Jordan; Ben and Ciara will take concern as to where Jordan has disappeared to and what she will do next! Little do they know that it will be danger doubled, as Jordan is on her way back to Bayview, and will break someone else out so they can wreak Halloween havoc on Salem!

General Hospital Spoilers: Brad Gets The Cold Shoulder From Julian