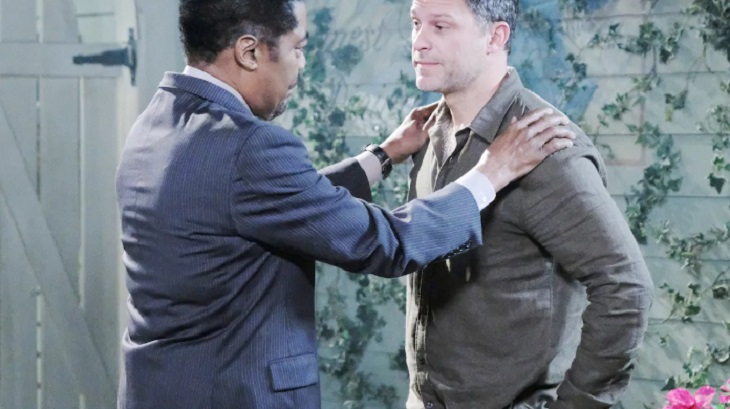 Days of Our Lives spoilers for Tuesday, July 16th finds Eric Brady (Greg Vaughan) thinking about his future and looking to make some big changes in his life. Also, Xander Cook (Paul Telfer) decides to get his revenge on Kristen DiMera (Stacy Haiduk) while Ted Laurent (Giles Marini) does his best to throw Hope Brady (Kristian Alfonso) off track. Also, Gabi Hernandez (Camila Banus) suspects that Nicole Walker (Arianne Zucker) might be behind all of the trouble that Stefan DiMera (Brandon Barash) has been dealing with lately.

Days of Our Lives Spoilers – Is Eric Leaving Salem?

It begins with Eric sitting down and thinking about his current situation right now. It’s without a doubt that things have gotten pretty awkward ever since Sarah Horton (Linsey Godfrey) and his brother Rex Brady (Kyle Lowder) have gotten married.

Eric doesn’t think that the three of them living together is a good idea anymore. He needs a new place to call home and what’s more, he also needs something to focus on. Ever since the church kicked him out, he hasn’t been the same. Days of Our Lives spoilers tease that Eric is soon going to make a very big announcement, but it will be one that will have a positive impact on his life.

Elsewhere, Xander decides to get his revenge on Kristen. For many months now he’s been very loyal to Kristen and has basically done everything that she has wished for. But throwing him under the bus and getting him arrested was the last thing that he ever expected. Xander is now determined to settle the score, which means that Kristen has more and more people on her tail. Not only will he try to get back at her in the worst way possible, but he will also steal her fake face.

Days of Our Lives Spoilers – Ted’s Cat And Mouse Game

Also, Ted is going to play a little game of cat and mouse with his lady love, Hope. But it’s not going to last very long. It won’t take much time for Hope to end up in Ted’s arms and when that happens, they will be in for a big surprise.

That’s because Hope’s daughter Ciara Brady (Victoria Konefal) will end up catching them in bed together. Needless to say, it’s going to leave her pretty shocked if not also upset, too. But for Hope, all she wants is for her daughter to accept her new man in her life. It won’t be easy, though.

Meanwhile, Gabi will also suspect that something is going on with Nicole and that she might be the reason why Stefan has been dealing with so many problems lately. Gabi is on to Nicole and it will only be a matter of time before she manages to put the puzzle pieces together on her end, too.