Days of Our Lives Spoilers Tuesday, December 24: Julie Worries about Tree Trimming – Eve And Hattie Receive Gifts – Xander Has A Surprise For Sarah 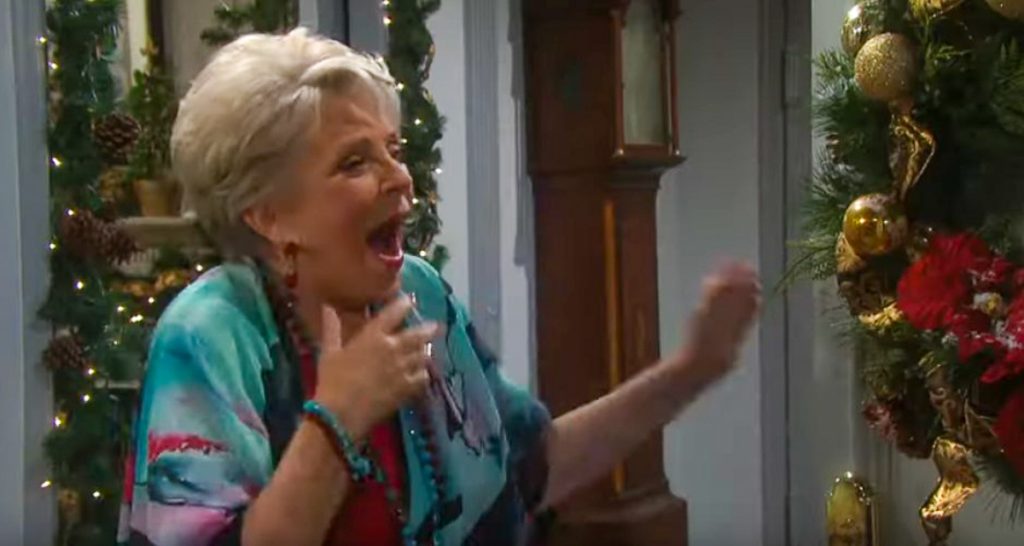 At the Horton house, Julie Williams (Susan Seaforth Hayes) worries that no one will show up to the traditional Christmas Eve tree trimming this year; no one from out of town has contacted her that they are coming, Will Horton (Chandler Massey) is in prison, Ciara Brady (Victoria Konefal) will probably be visiting him, “Hope Brady” (Kristian Alfonso) hasn’t been herself in over a year (literally!) and she assumes that Eli Grant (Lamon Archey) will be doing something with Gabi Hernandez DiMera (Camila Banus).

Besides, she doesn’t have an ornament for Gabi! However, as shown in the Days of Our Lives weekly preview, Julie was worried for nothing when the entire Deveraux family, Jack Deveraux (Matthew Ashford), Jennifer Deveraux (Melissa Reeves), Abigail DiMera (Kate Mansi) and a much improved JJ Deveraux (Casey Moss) are seen at her front door all yelling “surprise” and “Merry Christmas!” Abigail’s husband, Chad DiMera (Billy Flynn) and their little ones are not seen, but maybe he’s still getting them out of their car seats!

At Statesville Prison, Eve Donovan (Kassie DePaiva) and Hattie Adams (Deidre Hall) both receive an early Christmas gift; freedom! Eve has been exonerated since the security tapes from the night that Jennifer was pushed off of the balcony of “The Bistro” over a year ago were scrubbed by DiMera’s IT department in the Salem Police station and shown to have been doctored – of course the DiMera IT guy re-doctored it to show Dr. Wilhelm Rolf (William Utay) instead of the real culprit, Princess Gina! As for Hattie, she receives her freedom for Christmas in the form of an early parole!

This time she’s only been in for two years, even though she would be considered a violent offender; maybe she gets lucky because of prison overcrowding. Longtime Days of Our Lives viewers will recall that Hattie started out as a doppelganger for Dr. Marlena Evans (Deidre Hall) created by Stefano DiMera (originally played by Joe Mascolo) via plastic surgery and was originally played by Deidre Hall’s real life twin sister, Andrea Hall.

Xander Kiriakis (Paul Telfer) has a Christmas surprise for Sarah Horton (Linsey Godfrey) when he unexpectedly shows up in Boston, where she and Eric Brady (Greg Vaughan) have taken baby Mackenzie “Mickey” Horton for treatment for neuroblastoma, a dangerous form of infantile cancer that has already metastasized to some of her internal organs. However, the weekly preview video looks suspiciously like the Kiriakis living room; might this scene be of a ghost of Christmas yet to come, and not a scene from Xander’s surprise for Sarah in Boston? Both Xander and Sarah look devastated as he embraces her and she cries her heart out!