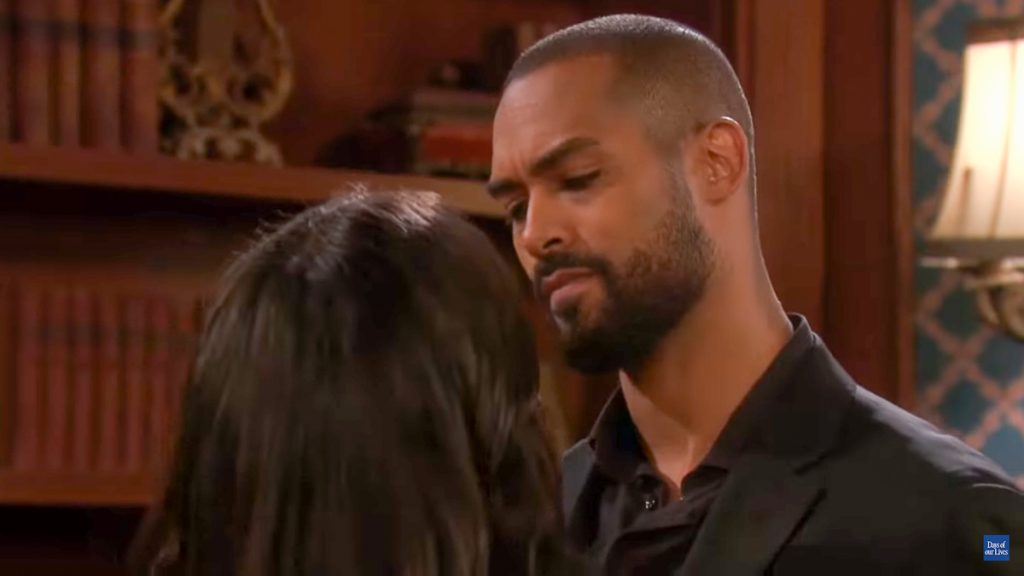 Days of Our Lives spoilers reveal that the time jump won’t just be about life one year later. There will be so many changes that fans aren’t the only ones to be shocked. Kristian Alfonso (Hope Brady) says that even the actors couldn’t believe the scripts. Here are the most jaw-dropping moments to look forward to.

It could be possible, especially since Eli and Gabi share a romantic moment. However, Gabi’s glee is overshadowed by the troubled look on Eli’s face. Could the commissioner be a victim of romantic blackmail, just like Lani had to choose between love and saving Julie Williams’ (Susan Seaforth Hayes) life?

As for “Wilson,” it seems that only half of the couple is in Salem. Sonny Kiriakis (Freddie Smith) tells another man that he misses Will Horton (Chandler Massey).

It is revealed that Kate Roberts DiMera (Lauren Koslow) goes through a major career change. Instead of making high-level executive decisions, she is now helping people decide on what to eat. She is now a waitress at Brady’s Pub.

Days of Our Lives Spoilers – Lost Memories and Rattling Revelations

Days of Our Lives spoilers indicate that Jennifer Horton (Melissa Reeves) will have some memory loss. No, she doesn’t get amnesia like her husband, Jack Deveraux (Matthew Ashford). However, she can’t remember the night of her accident. That is, until she tells her daughter that she believes someone pushed her.

This leads to Jennifer and Abigail DiMera (Kate Mansi) returning to the balcony to see if it triggers any memories.

Princess Gina (Kristian Alfonso) tries to get her man and John Black (Drake Hogestyn) does dine with her. However, “Jarlena” is solid, so she won’t get what she wants. However, Princess Gina won’t stop trying and will go to drastic measures. This prompts John to be smart and creative about how he handles the situation. Expect a juicy storyline with this tragic love triangle.

Steve “Patch” Johnson’s (Stephen Nichols) returns. While everyone is glad he is back, expect it to be filled with mystery. However, he won’t be the only one with a surprise. It appears that Kayla Johnson (Mary Beth Evans) could be dating again after Steve vanished.

Days of Our Lives Spoilers – What Else to Expect

It is teased that Eric Brady (Greg Vaughan) delivers a shocker to Nicole Walker (Arianne Zucker). Once a sweet child, growing up may not go as pleasantly as one parent would hope. Plus, a sordid plot ends, but another disaster follows.

Then, on New Year’s, expect the party to start with a bang. We’re not talking about that in a positive way, either. It is indicated that someone could get shot.