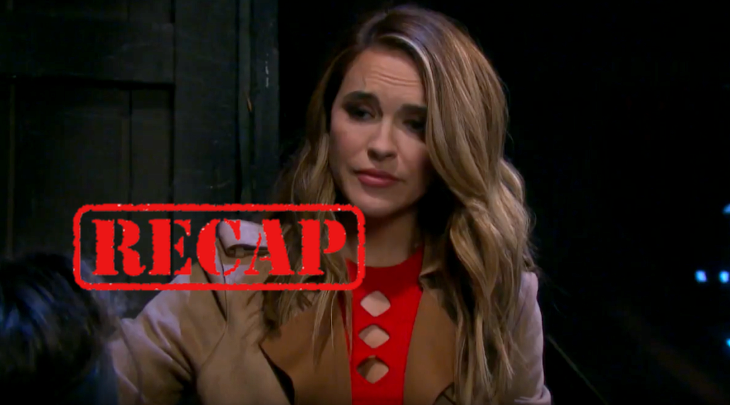 Days of Our Lives (DOOL) recap for Tuesday, February 5, 2019, reveals Ted (Gilles Marini) tells Ben (Robert Scott Wilson) that Marlena (Deidre Hall) thinks he is a threat and demands to know where Ciara (Victoria Konefal) is.

Ben tells them he doesn’t know where Ciara is but wants to help if she is in trouble. Ben asks Hope about Ciara’s flight and who she got a ride with from the airport. Hope (Kristian Alfonso) shoves Ben and accuses him of lying. Ted pulls Hope back, and Ben tries to tell her that he would never hurt Ciara. Ben tells Hope she has no evidence against him but tells him to lock him up if she’s sure he has Ciara.

Hope says she will find Ciara and threatens Ben again. Hope and Ted leave Ben’s room. Ben notices a cop trailing him, and he tells him he is going to his room and encourages him to look for Ciara. Ben looks at Ciara’s photo and asks where she is. Ben tries to call Ciara, but she can’t reach her phone.

Days of Our Lives’ Hope tells Ted what happened at Doug’s place. Hope still hasn’t gotten the footage from the airport; Ted asks what Hope will do if Ben is telling the truth. Ted believes that Ben cares about Ciara. Hope wants Ciara to be ok. The footages finally arrive at the police station; Hope is sure it will show Ben kidnapping her.

In the latest #DAYS, Hope desperately tries to find a missing Ciara.https://t.co/ZsCmioRrzb pic.twitter.com/EtNdPXlUoX

Days Of Our Lives Spoilers Ciara Begs For Help

Days of Our Lives’ Jordan (Chrishell Stause) arrives and uncovers Ciara’s eyes. Ciara is glad to see Jordan who says I probably the last person you wanted to see. Jordan tells Ciara she is there to help her. Ciara tries to convince Jordan that Ben didn’t do this to her. Jordan asks Ciara who else would have her at the cabin where Ben left her to burn to death. Jordan continues to try to convince Ciara that Ben kidnapped her but refuses to turn her loose. Jordan tells Ciara she will be safe there.

Jordan knows how Ben convinced her to trust him. Jordan says he heard about Ciara leaving town and she knows it was because of Ben. Ciara urges Jordan to untie her, but she refuses. Jordan tries to convince Ciara that she is trying to protect her. Jordan demands that Ciara do what she tells her. Jordan says she will handle Ben she’s the only one who can. Jordan tells Ciara she knows what it was like to grow up with Clyde (James Read). Jordan says she’s going to make sure Ben never murders anyone again.

Ciara tells Jordan Ben didn’t kidnap her, Jordan did. Jordan tells Ciara that Ben could want revenge on everyone in Salem. Jordan leaves Ciara tied up and goes back to Salem. Jordan arrives to speak to Abby (Kate Mansi).

Days of Our Lives’ Abby is on the couch, and Julie (Susan Seaforth Hayes) joins her and wants to watch tv. Julie tells Abby that Doug (Bill Hayes) fell asleep so they can talk about her forgiving Chad. Abby asks Julie how she knows Chad hasn’t gotten her forgiveness already. Julie tells Abby that Chad called to thank her for dinner. Julie says with Chad and Stefan (Tyler Christopher) both running Dimera; things must be crazy. Abby tells Julie that Chad offered to let Dimera go for her and the kids.

Julie question why Abby doesn’t forgive him already. Abby tells Julie she can’t get back with Chad and have him resent her. Abby tells Julie she doesn’t know how she is going to get over Chad taking her baby and believing Gabi over her. Abby says she worked hard to get her family back and when she needed Chad he wasn’t there for her. Julie encourages her to think about the good times. Abby wonders how many people’s lives Stefan has ruined. Abby tells Julie she loves her but has to figure this out on her own.

Days of Our Lives’ Chad is playing chess at the mansion; Kate (Lauren Koslow) stops by to check on him. Kate wants to make sure Chad and Stefan haven’t killed each other. Chad says he’s not going to kill Stefan, but he doesn’t mind if someone else does. Chad tries to get Kate to leave the house since she knows he is ok. Chad tells Kate she’s not going to win him over, she can leave, or security can show her out. Kate wants to know what his plans are for Dimera. Chad tells Kate he has offered to give up Dimera for Abby.

Chad says Abby has a lot to forgive him for; Kate says because she has so little to be forgiven over. Chad tells Kate she knows nothing about putting family first unlike him. Kate tells Chad that Gabi (Camila Banus) manipulated all of them. Chad tells Kate he has already lost everything that matters to him, the company doesn’t matter. Kate tells Chad he knows she always thought he could do better than Abby, but she makes him happy. Kate urges Chad not to do anything rash; Chad can win in the end if he doesn’t give up. Kate tells Chad that Stefan got shot and she tells him to fight for his legacy.

Days of Our Lives’ Stefan is shot by the gunman who threatens to finish him off before taking care of Chloe (Nadia Bjorlin). Stefan kicks the gunman, and they wrestle over the gun. Stefan kills the gunman and Chloe goes to get something for his arm. Chloe brings Stefan a towel and tells him how amazing what he did was. Chloe tells Lani what the gunman said before going to check on Stefan. Chloe tells Stefan he is a hero and she thanks him. Chloe says she sent the kids to New York with her mother.

Days of Our Lives’ Lani (Sal Stowers) and Eli (Lamon Archey) are in bed, both have confessed their love and discuss how they were afraid to say it before now. Lani and Eli talk about losing the baby and how they got past it. Eli tells Lani that what matters no is they are together. Eli says he wanted to make her smile with the picnic; she said it worked. Lani says she keeps wondering what Stefan thought when he walked in. Lani and Eli get interrupted by a phone call telling them about the shoot at Doug’s Place. Lani and Eli arrive, and Chloe tells them what happened. Eli gets Stefan to go outside with him to the ambulance. Eli calls Julie to tell her about the shooting; she heads to the club. Julie arrives and says she has to call Doug and the insurance company.