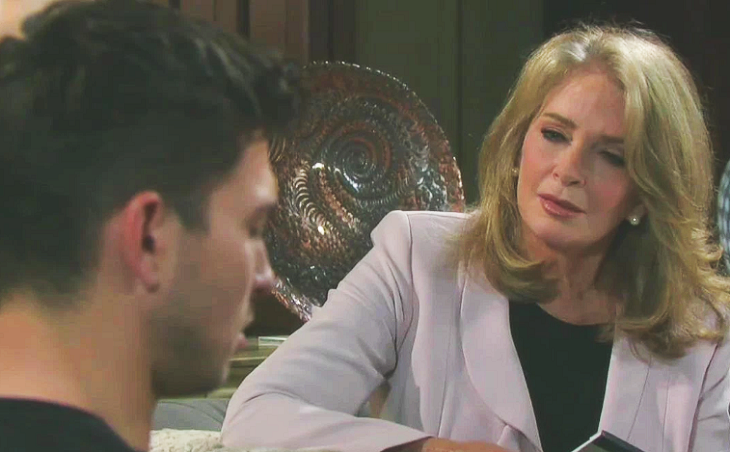 Days of Our Lives (DOOL) recap for Thursday, May 30, 2019, reveals Tripp Dalton (Lucas Adams) searches for the passport when Jack Deveraux (Matthew Ashford) walks up to him with them.

Jack threatens Tripp with prison time but offers to help him if he gives up J.J. Deveraux (Casey Moss) and Haley Chen (Thia Megia). Jack reveals that he listened in on J.J.’s conversation with Rory at the police station. Tripp tells Jack he will probably never see J.J. again and it’s his own damn fault. Jennifer knocks Jack out when he tries to take Tripp downtown. Tripp takes off with the passports to deliver them to J.J. and Haley.

Jennifer tries to wake Jack up; she threatens to call an ambulance. Jack accuses Jennifer of knocking him out, Xander Cook (Paul Telfer) says Jennifer is lying about finding him there. Xander grabs Jennifer to make a citizen’s arrest, and they take her downtown. Jack insists Eli Grant (Lamon Archey) book Jennifer and finds out where J.J. is. Jack praises Eve to Xander. He tries to get Jennifer to cooperate and tells her she will spend the night in jail when she refuses.

Days of Our Lives John Black (Drake Hogestyn) tells Eve Donovan (Kassie DePaiva) that he needs to talk to her about Dr. Rolf (William Utay). John tells Eve she was in the office long enough to steal Rolf’s diary and explains why she would steal it. He keeps insisting that Eve took the journal and wants her to give it up. Eve says she doesn’t have it; John doesn’t believe her. Eve claims to have been there to set up a fellowship. She wants to know why John wants the diary.

John tells Eve that Will Horton (Chandler Massey) has a brain tumor and they need the journal to fix it, they have to have the formula. He tells Eve that finding the diary is a matter of life and death. John explains that they lost Will once and cannot lose him again. John pleads with Eve to help Will. He explains that Eve knows what is coming, and she needs to stop it. Xander visits Eve and she tells him she needs the diary now.

Days Of Our Lives Spoilers – Ben Weston Starts To Remember

Days of Our Lives Marlena Evans (Deirdre Hall) show up at Stefan’s to meet Ben Weston (Robert Scott Wilson). Ben explains he needs to remember everything about the fire. Ben explains to Marlena that Eve is determined to take him down for that fire, and he needs to remember everything that happened that night. Marlena says Eve can’t convict him just because she wants to put him in jail.

Ben reminds Marlena how Eve ran the campaign. Ben explains to Marlena that he might remember a clue to help. Marlena hypnotizes Ben again and takes him back to the cabin. Ben remembers leaving to go to the drug store to pick up his medication.

Ben remembers seeing the fire. Rafe Hernandez (Galen Gering) and Hope Brady (Kristian Alfonso) were their helping Ciara Brady (Victoria Konefal) out of the fire. Ben tells Marlena he is missing something.

Marlena wants to try something different. Ben tells Marlena about going to the pharmacy and heading back to the cabin. Ben’s medication is kicking in, and he feels better. Ben tells Marlena he hears music, then Rafe and Hope with Ciara. Ben says the music is gone. He hums the tune but can’t place it. Marlena tells Ben that doesn’t mean that someone else was there but tells him to call if he needs anything.

Days of Our Lives Ciara Brady arrives at the loft as Claire Brady (Olivia Rose Keegan) is leaving. Ciara gives Claire the figurine and Claire thanks her. Claire later accuses Ciara of thinking she is crazy. Claire assures Ciara that she doesn’t need a shrink and she is sure she can win Tripp back.

She tells Claire both she and Marlena will always be there for her. Ciara is glad that she and Claire got past their differences over Tripp and Theo Carver (Kyler Pettis). Ciara tells Claire they could have killed each other. Claire’s phone rings and it’s the tune Ben was humming.