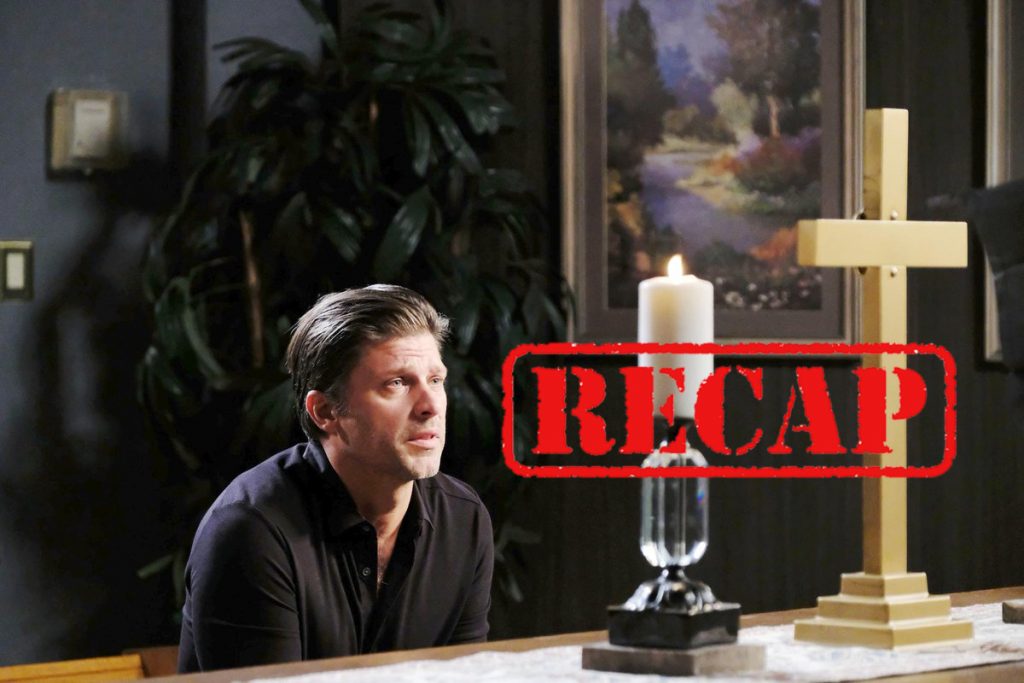 Sarah tells Eric she had tried to can’t stay away from them. Sarah kisses Eric, and he pulls away saying he promised God to stay away from her. Rex Brady (Kyle Lowder) walks in and sees the kiss and attacks Eric. Rex wakes Eric up and tells him he was having a nightmare. Eric doesn’t remember the dream. Rex tells Eric that he and Sarah are very close and he talks about Brady and Nicole as well. Rex apologizes to Eric; he knows Eric would never come between him and Sarah. Eric is helping to clean up when Sarah arrives to see Rex. Eric thanks Sarah for helping with his mom.

Sarah apologizes for kissing Eric and wants to clear the air. Sarah doesn’t want this awkwardness to ruin their friendship. Sarah tells Eric he doesn’t have to reassure her, no she can move forward with Rex. Sarah thinks Rex for arranging dinner. Rex has downloaded music and hopes they can dance. Sarah breaks a glass and falls to the floor. Sarah has sprained her ankle, Rex has Eric get some ice, and he is going to put a bandage on it. Eric touches Sarah’s leg, and both are noticeably affected. Rex wraps Sarah’s ankle as Eric cleans up the glass.

Days Of Our Lives Spoilers: Claire Continues To Lie

Days of Our Lives’ Tripp Dalton (Lucas Adams) is upset and leaving work when Claire Brady (Olivia Rose Keegan) walks up to him. Tripp is upset over Jack Deveraux (Matthew Ashford) stopping by and trying to apologize. Claire accuses him of being obsessed with Haley Chen (Thia Megia). Tripp tells Claire he is not obsessed with Haley, but he feels terrible for her. Claire pretends to understand. Tripp tells Claire he knows who turned Haley in and gives her a name. Claire understands why Tripp would suspect her and says she would never betray his trust like that.

Tripp asks if Claire has talked to her mom. Claire lies and tells him her mom is busy and talks about ideas to help Haley. Claire wants Tripp to take her home for a date night. Tripp gets a message about Haley’s fate. Tripp tries to call Haley, but it does to voicemail. Claire says she will pick up something for dinner and sends Tripp to the loft. Haley arrives at the loft and informs Tripp of J.J.’s proposal. Haley and Tripp talk about the possible consequences of this plan not working. Claire arrives home, and Tripp says he has something to tell her and she’s not going to like it.

Days Of Our Lives Spoilers: Haley Thinks J.J. Feels Sorry For Her

Days of Our Lives’ J.J. Deveraux (Casey Moss) offers to marry Haley; she tells him he is out of his mind Haley tells J.J. they aren’t in love or engaged and he could go to jail for fraud. J.J. says not if it is a real marriage which it could be someday. Haley doesn’t want J.J. to marry her out of guilt. J.J. tells Haley she must know he has feelings for her.

J.J. tells Haley he misses her and wishes they could pick up where they left off. Haley tells J.J. she can’t marry him because he can’t fix this. Haley tells J.J. he betrayed her confidence and she can’t and won’t marry him. J.J. wants Haley to go back to his place to think. Haley needs to go back to the loft. J.J. believes this is the only way to help Haley and tells her they are under the gun. Haley goes back to J.J.’s room and tells him that marrying a U.S. Citizen is the quickest way to fix things and informs him she is marrying Tripp.

Days of Our Lives’ Hope Brady Hernandez (Kristian Alfonso) updates Ted Laurant (Gilles Marini) on the shooting at the Dimera mansion. Ted asks Hope how Ciara Brady (Victoria Konefal) is; she’s glad Ciara got out ok. Ted assures home he is trying to turn his life around and credits Hope for that. Ted wants to keep working with Hope and keep this job. Ted tells Hope he owes her an apology because of his issues with Rafe Hernandez (Galen Gering). Ted offers to order dinner so they can eat and work, Rafe walks in and is upset to see them together. Rafe asks for a minute alone with Hope, Ted leaves.

Rafe was hoping Hope could have dinner with him tonight, but she seems busy. Rafe says things haven’t been great and he wants to fix that, Hope agrees to have dinner with him. Rafe has a romantic dinner set up at the pub. Hope kisses him and asks what the occasion is. Rafe says they missed celebrating their anniversary. Hope doesn’t want to look back anymore. Rage tells Hope their wedding day was the best day of his life. Hope and Rafe talk about last Valentine’s Day and how Hope is his top priority. Rafe promises Hope the good times are coming back. Rafe wants Hope to go on a pleasure trip, not a hunt for a criminal and celebrate being together. Ted interrupts Hope and Rafe’s dinner with news about the shooting at the Dimera mansion. Rafe is upset that Ted interrupted them.

Days Of Our Lives Spoilers: Sami’s Search For Allie Ends With Triple Shocker…