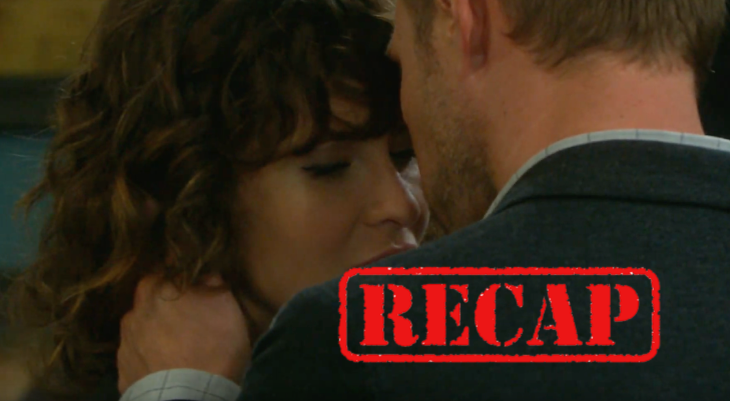 Days Of Our Lives (DOOL) recap for Thursday, February 7, 2019, reveals Sarah (Linsey Godfrey) tells Rex (Kyle Lowder) she’s not trying to play with him. Rex offers to drive Sarah home, and she tells him she thought to stop thing was a good idea, but it wasn’t easy.

Rex doesn’t want to push Ciara (Victoria Konefal), and she says things can’t immediately go back to the way things were. Sarah says they can be a little better; they begin to kiss. Rex and Sarah leave clothes all over Eric’s (Greg Vaughan) living room as they move toward the bedroom. Eric picks up Sarah’s shirt and smells it before throwing it across the room.

Days Of Our Lives’ Jordan (Chrishell Stause) gets Charlotte in a car seat and walks her downstairs promising to keep her safe from Ben (Robert Scott Wilson). Abby (Kate Mansi) walks in and asks what the hell are you doing. Stefan (Tyler Christopher) is standing and gives Abby the spoon that he bought Charlotte. Abby goes upstairs to check on the baby. Abby calls Chad (Billy Flynn) and tells him the baby is gone. Abby tells Chad that Stefan was there and suggest he took the baby. Chad tells Abby he’s there and he will take care of it.

Love is in the air in Salem! Cast your vote for your favorite #DAYS couple now in the #DOOLapp and find out who wins on Valentine's Day. ❤️ https://t.co/F2q5A4S9tP pic.twitter.com/0C6JmLzg16

Chad demands to know what Stefan has done with his daughter. Stefan wants Chad to catch him up on what is going on because he has no idea. Chad accuses Stefan of having Charlotte kidnapped to get leverage over the company. Stefan tells Chad if that were the case he would be demanding he resign already. Stefan tells Chad he cares about Charlotte and to find the person who is behind this. Chad leaves to go to Abby. Chloe (Nadia Bjorlin) arrives to check on Stefan, and he asks how she is doing.

Chloe tells Stefan that Brady (Eric Martsolf) offered to let her move in with him, but Victor (John Aniston) said no. Stefan asks Chloe to move in there. Stefan tells Chloe they know each other pretty well after today. Stefan tells Chloe his staff can earn their paycheck by picking up after the kids. Chloe gets a text while she is talking to him. Stefan reads the text and tells Chloe she is staying there tonight.

Days of Our Lives’ Lani (Sal Stowers) and Eli (Lamon Archey) are questioning Abby; there is no sign of forced entry. Abby thinks Stefan took the baby and gave her to one of his guys. Abby gives them the rundown of the conversation with Stefan. Abby asks who else would do something like that. Chad arrives to speak to Abby and tells her he doesn’t think Stefan did this.

Previously on #DAYS, Eli questions Hope about her relationship with Ted. https://t.co/ZsCmioRrzb pic.twitter.com/9NoNR0NTtG

Abby remembers that Jordan stopped by and was there right before she saw Stefan. Abby says Jordan would never kidnap her child but Ben would. Eli says they just talked to Ben and there was no sign of a baby. Lani and Eli have had forensics check the house, and they leave promising to keep in touch.

Days Of Our Lives Ben Has A Vision Of Ciara

Days Of Our Lives’ Ben is in his room when Lani and Eli come in to question him about Ciara (Victoria Konefal). Ben asks if they have found Ciara, but he tells them no. Lani and Eli question Ben about people who might have a grudge against Ciara. Ben tells them he doesn’t know where she is. Ben is talking to Ciara’s picture and tells her he can’t lose her.

Ben starts seeing Ciara in his room and tells her he tried to tell her he was going to quit his job. Ben says if they didn’t have that fight, she wouldn’t have left. Ben hears Ciara ask him to find her before it is too late. Ciara tells Ben to stay on his meds and get some sleep. Ciara tells him to get his strength up because she is counting on him. Ben tells Ciara he will never let her down again. Ben wakes up with a start and asks Ciara where she is.

DOOL Eric And Sarah Make Up

Days Of Our Lives’ Eric is on the computer when Sarah walks out in her underwear. Eric apologizes for startling her. Sarah puts Rex’s shirt on and wants to talk to Eric. Sarah apologizes to Eric again and tells him she’s never regretting hurting anyone more in her life. Sarah tells Eric she had a lot of regrets in her life. Sarah says sleeping with Xander (Paul Telfer) was in a category all it’s own.

Sarah says hanging out with Eric was fun, and they had a great connection, and she ruined that. Sarah brings up the fast and furious movies and tells Eric she misses their friendship and begs him to be friends again. Sarah asks Eric if he doesn’t still believe in forgiveness. Rex comes in and interrupts wanting to know what is going on with them. Eric says he was about to accept her apology, Sarah is thrilled. Rex is happy that Eric and Sarah have worked things out and he asks her to come back to bed.

Days Of Our Lives Victor Shuts Brady Down

Days of Our Lives’ Brady and Victor are discussing Titan. Victor is glad to have him back in the fold. Brady hears about the shooting at Doug’s place and tells Victor about it. Brady calls Chloe, and she comes to visit him at the mansion. Chloe tells Brady and Victor that the henchman vowed that Chloe and the kids would never be safe. Brady wants Chloe to move in; Victor says no. Brady tells Victor this isn’t a time for one of his grudges. Chloe tells Brady this is a bad idea and starts to leave.

Days of Our Lives’ Ciara is trying to get loose when Jordan comes in and discovers what she has been up to while she was gone. Ciara hears the baby crying and realizes that Jordan has taken Charlotte as well. Jordan tells Ciara that she wanted to bring both Abby and Charlotte there to protect them. Ciara tells Jordan that Ben wouldn’t do that. Jordan doesn’t believe Ciara and keeps saying she is protecting them. Ciara encourages Jordan to take Charlotte home.

Jordan says she will take Charlotte back as soon as she proves they are safe from Ben. Jordan vows not to let Ben hurt anyone again. Jordan goes to get the crib for the baby and Ciara tries to convince her that the cabin is no place for a baby. Jordan says parents don’t always protect their kids; her mother didn’t protect her. Jordan goes out to get the crib. Jordan has trouble unfolding the crib and begins to get more upset, and the baby starts to cry. Jordan refuses to let Ciara hold Charlotte. Ciara begs for Ben to find her.