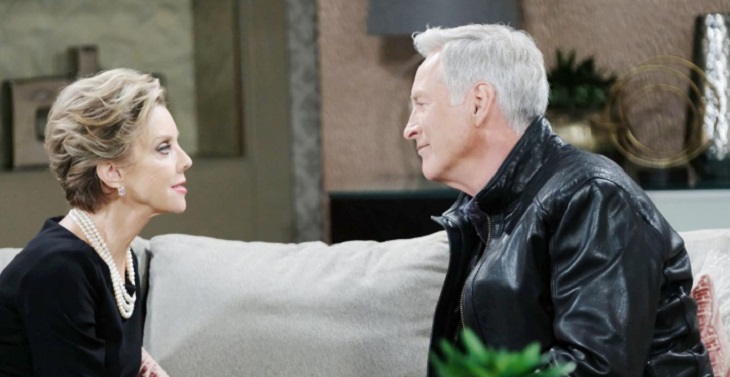 “Days of Our Lives” spoilers for Monday, February 4, tease that Ciara Brady (Victoria Konefal) is for a big surprise. She’ll be shocked to see Jordan Ridgeway (Chrishell Hartley) at the cabin where she’s being held hostage. Ciara won’t understand what’s going on, so Jordan will fill her in. She’ll give Ciara a bogus story about how Ben Weston (Robert Scott Wilson) kidnapped her and tied her up there.

Jordan will insist that Ben’s dangerous, but she’s going to help Ciara stay safe. Of course, Ciara will eventually find it odd that Jordan’s not actually freeing her. It turns out Jordan has taken a crazy turn, so she’ll be far from helpful. Jordan will think her brother is someone who can never really overcome his dark side, but she’s clearly the bigger threat to Ciara right now.

Days of Our Lives – Diana And John Reunion

Over with John Black (Drake Hogestyn), he’ll have an unpleasant reunion. Since Diana Cooper (Judith Chapman) just referred to John as “Roman,” that seems to prove the speculation that she’s actually Diana Colville (last played by Genie Francis). There was a time in John’s life when he believed he was Roman Brady (now played by Josh Taylor). He had a romance with Diana while he was using that name.

Diana wants “Roman” back, so John won’t exactly enjoy this little blast from the past. He’ll realize the situation with Leo Starke (Greg Rikaart) is about to get a lot more complicated. Across town, “Days of Our Lives” spoilers say Claire Brady (Olivia Rose Keegan) will offer an apology. She’ll tell Tripp Dalton (Lucas Adams) she’s deeply sorry for sabotaging his relationship with Ciara.

Claire will understand that what she did was wrong, but she was desperate to have a future with the guy she wants. Tripp will realize Claire’s heart led her astray, so DOOL spoilers say he’ll choose to look past this. He’ll give Claire another chance and hope that maybe they can find happiness together.

Days of Our Lives – Stefan Gets Shot

Other “Days” spoilers state that Stefan DiMera (Tyler Christopher) will rescue Chloe Lane (Nadia Bjorlin). He’ll step in front of someone armed and out to avenge Mateo aka El Fideo’s (Andoni Gracia) death. Stefan will take a bullet for Chloe and ultimately save her life. His bravery will earn him some serious points, so a new “Days” love story may be brewing.

Clocking in another day as Salem University Hospital’s Chief of Staff! #DAYS