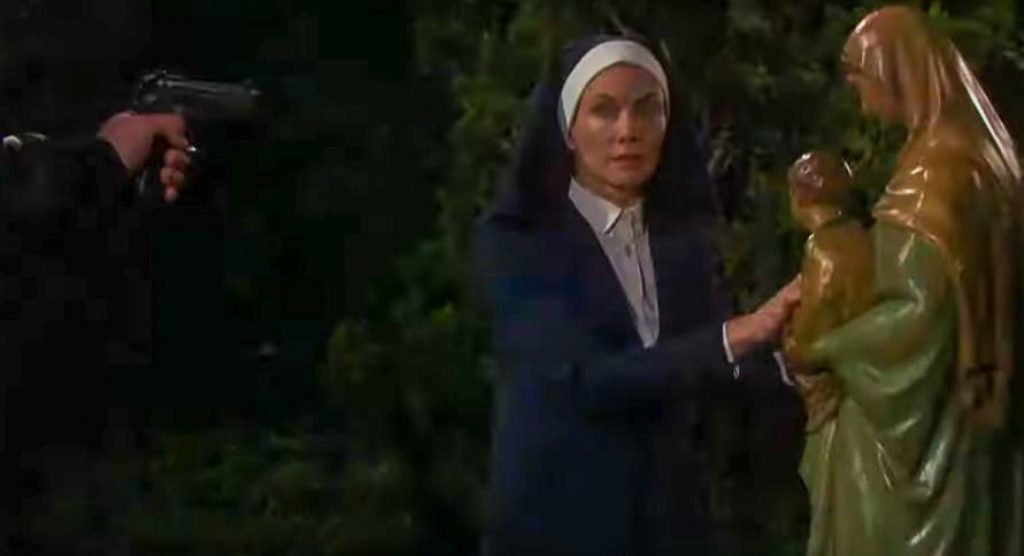 JJ Deveraux (Casey Moss) confronts Kristen DiMera (Stacy Haiduk) about the death of his girlfriend, Haley Chen (Thia Megia). Kristen is not denying that she was the cause of Haley’s death but admits she was out of her mind with grief over her dead baby and did not intend to kill Haley. However, the district attorney ruled the death was accidental, and if the district attorney was still Melinda Trask (Laura Kai Chen) one must remember that she was Haley’s mother! Surely if it had not been accidental Haley’s own mother would have wanted the death penalty for Kristen! JJ may go ballistic and pull a gun on her, however – according to the Day of Days preview video! 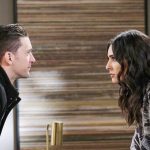 JJ isn’t the only Deveraux looking for answers in Monday’s episode. Abigail DiMera (Kate Mansi) takes their mother, Jennifer Deveraux (Melissa Reeves) back to The Bistro and takes her to the balcony to jog her memory about the night she was pushed over, causing her to tumble to the ground and suffer a one-year coma from which she has recently recovered. She hopes that her mother will recall more details from the time period when she entered the restaurant to when she was pushed. Even Jennifer doesn’t feel right about Eve Donovan (Kassie DePaiva) having pushed her, and Abby suspects that the security tapes had to have been doctored!

Apparently having returned from Rome, Chad DiMera (Billy Flynn) admits to Kate Roberts (Lauren Koslow) that he has been in contact with his father. Kate, among many other women, had been married to Stefano DiMera (originally Joe Mascolo, now Stephen Nichols) for a period of time and she may be surprised, but yet not surprised, considering Stefano in his own body would be a very old man and in ill health! As the saying goes, the Phoenix always rises, one way or another! As Days of Our Lives viewers know, “Steffy” was not happy to be living in the body of one his enemies, but with Patch’s body he’s half his physical age again! Even Dr. Wilhelm Rolf (William Utay) can’t cure everything, and it was time to trade up to a newer model!

Lani Price (Sal Stowers) is stunned to learn that Eli Grant (Lamon Archey) is now in a relationship with Gabi DiMera (Camila Banus), who he had actually dated previously to meeting Lani! Days of Our Lives viewers will recall that Gabi’s late husband, Stefan DiMera (Brandon Barash) was barely cold before she pounced on Eli and took advantage of his grief after Gabi had forced her to dump Eli at the altar and break up with him forever! Will she finally admit what happened? It’s doubtful since she doesn’t know if Gabi still has the app on her phone that she could kill Julie Williams (Susan Seaforth Hayes) with!