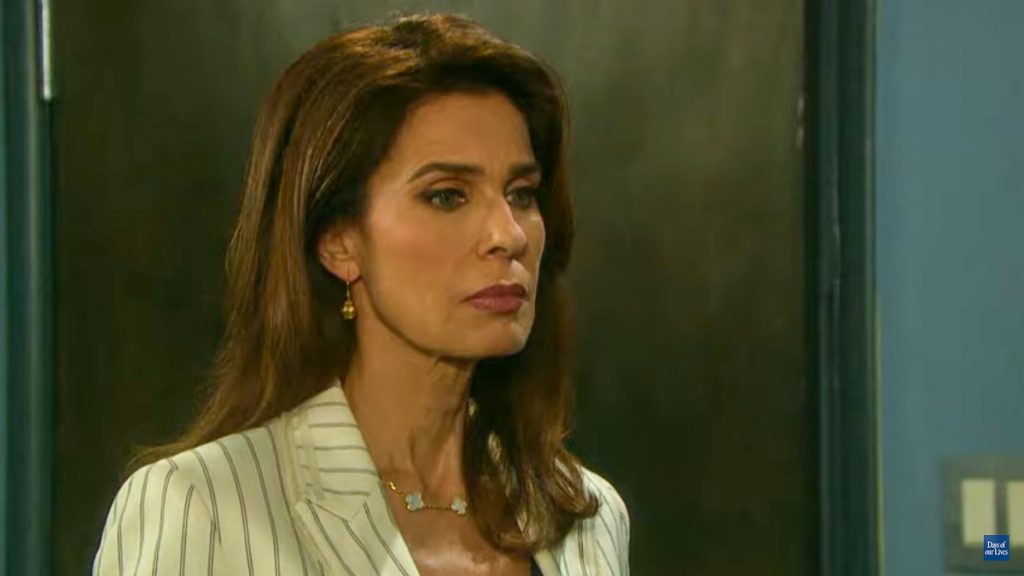 Days of Our Lives spoilers reveal Jennifer Horton (Melissa Reeves) has a memory from the night she fell off the balcony. What exactly will she remember? What does this mean for Eve Donovan (Kassie DePaiva) and Princess Gina (Kristian Alfonso)? Keep reading to discover the details about this storyline.

DOOL spoilers reveal Abigail DiMera (Kate Mansi) isn’t having much luck talking to people about the night of Jennifer’s accident. Her next step is to ask Commissioner Hope Brady for the case file. However, that doesn’t go exactly as planned. In fact, Hope reprimands Abigail. So, she decides to take another route by escorting Jennifer to the balcony. She hopes it will trigger a memory and she is correct, it does.

It is teased that Jennifer has a memory about that night. However, the details have not been released. Perhaps she knows that Hope, who has been transformed into Princess Gina, was there that night. It seems like that might be the case due to previous spoilers that the walls close in on Princess Gina’s ruse.

Days of Our Lives Spoilers – The End for Princess Gina?

Days of Our Lives spoilers suggest that when Jennifer remembers what happened, that will put the focus squarely on Princess Gina. As fans recall, she lied when being questioned about being on the balcony. She claimed that she was going to head up there, but heard a scream. By the time she arrived, Jennifer was already on the ground below. However, that isn’t true. She pushed Jennifer and nearly ended her life.

When everyone gets close to finding out the truth, Princess Gina makes plans to flee Salem. However, it is indicated that she doesn’t get very far. This means with the guilty person discovered, Eve can finally be released from prison. She may not be the noblest person in town, but she shouldn’t pay for a crime she didn’t commit.

The only question is what does this mean for Hope? Will she have to go to prison for what her alter ego has done?