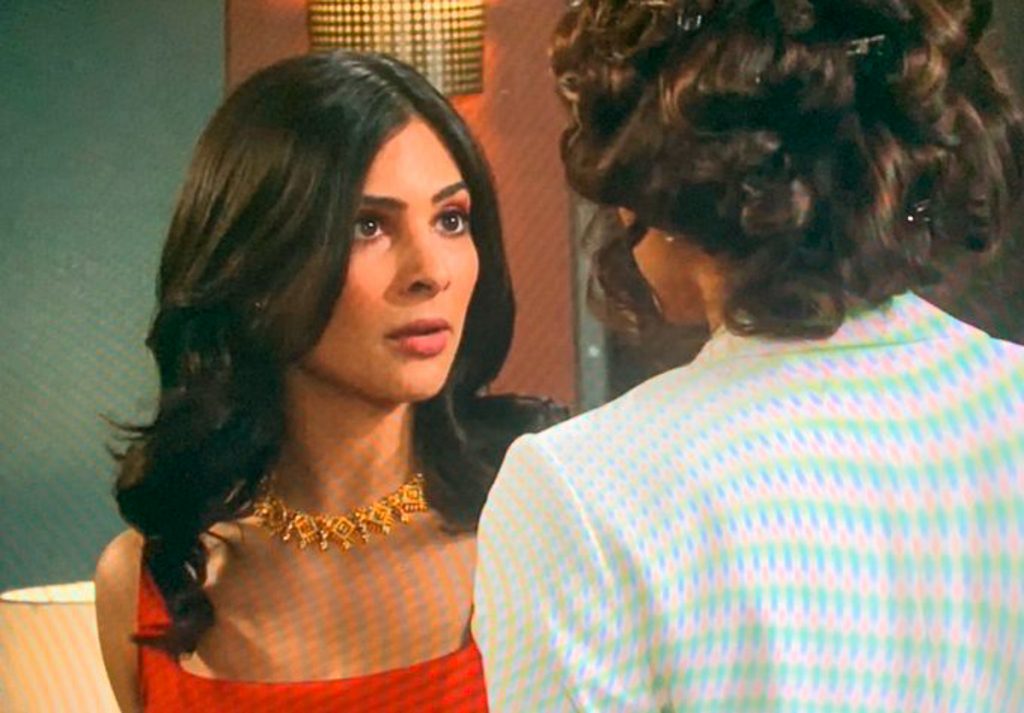 Days of Our Lives spoilers reveal Gabi Hernandez DiMera (Camila Banus) believes she’s untouchable. However, Chad DiMera (Billy Flynn) received an email from his father, Stefano DiMera (formerly Joseph Mascolo) asking for his help in taking down the widow. Just when Gabi thinks she has won, the widow is attacked in every direction. Here’s what you need to know.

It seems that the longer Gabi was able to control Lani Price (Sal Stowers), the more powerful she felt. It was just the beginning of her power trip and now, the widow thinks she is untouchable. She now knows what real power feels like and realizes she can get her way in nearly every situation. She has the DiMera fortune, name and connections. The fashionista is out of control and it seems there is are members of the DiMera family want her dethroned.

Days of Our Lives spoilers tease that Stefano has been in contact with both Chad and Tony DiMera (Thaao Penghlis). “Chabby” recently had a discussion in which Chad confessed to being in contact with his father. In fact, he received an email from the patriarch requesting his assistance in taking down Gabi.

However, Abigail DiMera (Kate Mansi) wasn’t convinced that the real Stefano was sending Chad messages. Typing a reply for Chad, they asked Stefano for a face-to-face meeting before the conversation went any further.

That meeting will happen, but it is suggested that things don’t go quite the way Chad expects. Even so, it appears that he still deals with Gabi. It is revealed that Chad has an agenda.

Days of Our Lives Spoilers – Counterattack

Gabi is worried that with Chad’s return, she could lose everything she has gained in the past year. Wanting to be prepared to counterattack, she needs to find out Chad is planning. Gabi cries to Eli Grant (Lamon Archey) about the situation, claiming Chad is plotting against her.

Then, she convinces the former commissioner to snoop through the files on Chad’s computer. Only he gets caught red-handed by Abigail, who promptly shames him for invading her husband’s privacy and snooping through confidential files for DiMera Enterprises.

It seems that Gabi might not be paranoid. Chad is planning something, which he eventually shares with Abigail. Unfortunately, the heir is tricked and Gabi thinks she has won.

Despite being fooled, Chad will continue moving forward with his plan. It is teased that just when Gabi feels she has control, she gets blindsided by a counterattack. Expect her to be attacked in every direction, and Chad is probably instrumental in that. Of course, it helps that Stefano is watching, waiting and working behind the scenes.

Gabi thought she was the most powerful person in Salem — until the return of a character that will stun all of Salem. Gabi will be lucky she only gets booted out on her behind. She better hope that Stefano will stop there. She knows what the patriarch is capable of and she certainly doesn’t want to be a victim of his wrath.

Be sure to tune in to catch up on everything happening on DOOL right now. Come back here often for the latest Days of Our Lives spoilers, updates, news, and rumors!

General Hospital Spoilers: Carly Runs Into Laura – Will She Tell Laura About Nikolas?