Days of Our Lives Spoilers – Stefano DiMera Reveals Himself, But As Steve Johnson

The week starts out with Kate Roberts (Lauren Koslow) threatening to expose Stefano (Stephen Nichols) for who he really is, although he happens to be occupying Steve Johnson’s (Stephen Nichols) body at the time. Later, Stefano gets tired of being cooped up and talks to “Hope Brady” (Kristian Alfonso) who has been turned into Princess Gina Von Amberg (Kristian Alfonso) by Stefano himself years ago by a control chip in her brain which he used to control via satellite and a wristwatch, but Dr. Wilhelm Rolf (William Utay) upgraded the system via an implant in her neck and Stefano no longer has to control her. She suggests he go to Doug and Julie Williams’ (Bill and Susan Seaforth Hayes) New Year’s Eve party, but go as Steve Johnson and put a patch on his eye. He goes to the party, announces he’s back, as Steve, to the shock of his friends and family at the party.

Kayla Brady (Mary Beth Evans), Justin Kiriakis (Wally Kurth), John Black, (Drake Hogestyn) and Marlena Evans (Deidre Hall) had been discussing who could have been the mystery man who came to the children’s Christmas party at Salem University hospital, since Roman Brady (Josh Taylor) couldn’t find his Santa suit. Even if John may have suspected Stefano was Santa, considering the black onyx brooch that Marlena found in her purse, Kayla thought he was Steve, and this seems to confirm it. Gina, meanwhile is uncomfortable with Detective Rafe Hernandez (Galen Gering) and his suspicions about both herself as Hope, and Stefano as Steve, and as Hope, fires him! 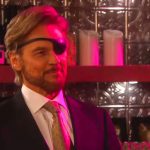 Kristen DiMera (Stacy Haiduk) is back, and she wants two things: DiMera Enterprises and Brady Black (Eric Martsolf)! But this week she seems to be focusing more on getting Brady back. Kristen is enraged when she spots Brady and Nicole Walker (Arianne Zucker) in a romantic looking clinch in front of Julie’s Place, and is tormented by the thought of the two of them together. She is still dressed in her nun’s habit when she confronts Brady to tell him she wants him back, to which he replies he thought she was married to God, and they had broken up, and why should she care if he moved on or with whom?

As shown in the Days of Our Lives weekly preview video, she strips off her nun’s habit right then and there, to reveal a low cut, slinky red dress, and as soon as Brady turns his back to walk away, she flies into a fury and attacks Nicole!

Lani Price (Sal Stowers) certainly gets Gabi Hernandez DiMera’s (Camila Banus) attention by throwing a large flower pot through the window of her Gabi Chic store in Horton Town Square, and shattering the window completely! Gabi will discover someone has vandalized her store, and accuse Chad and Abigail DiMera (Billy Flynn, Kate Mansi) of the crime, and bring her boyfriend, Eli Grant (Lamon Archey) in on the case. He will receive surprising news about the security tape, which shows a nun who looks like Lani! Gabi will be stunned to learn that Lani, indeed, is back in Salem!

In the aftermath of “Steve’s” announcement at the New Year Eve Party, his friends and family lash out, Kayla in particular! Justin tears into him at the party for abandoning Kayla and not showing up or even sending a sympathy card when his sister Adrienne Kiriakis (Judi Evans Luciano) was killed, while Kayla follows him home – which now will be John and Marlena’s house – and confronts him one- on-one, to which he merely gives a cold response about not returning to Salem for her and the rest of their family! Kayla verbally rips him to shreds!

Days of Our Lives Spoilers – Ciara Brady Continues To Support Ben Weston, But Is Found Out By Xander Kiriakis And Victor Kiriakis

Ciara Brady (Victoria Konefal) continues to support Ben Weston (Robert Scott Wilson) on the day of his final appeal, and has continued to try and capture real evidence that he was framed by Xander Kiriakis (Paul Telfer) and her own grandfather, Victor Kiriakis (John Aniston)! However, Xander and Victor compare notes and Xander will talk about Ciara’s lockbox that she had to drill through looking just like his that apparently was stolen and replaced with another one like it – which he was unable to open with his key – and all the times he caught her in his office when she shouldn’t have been, and they realize Ciara has been playing them!

‘The Bold and the Beautiful’ Spoilers: Sally’s Importance Expands – Wyatt And Liam Linked In New Venture