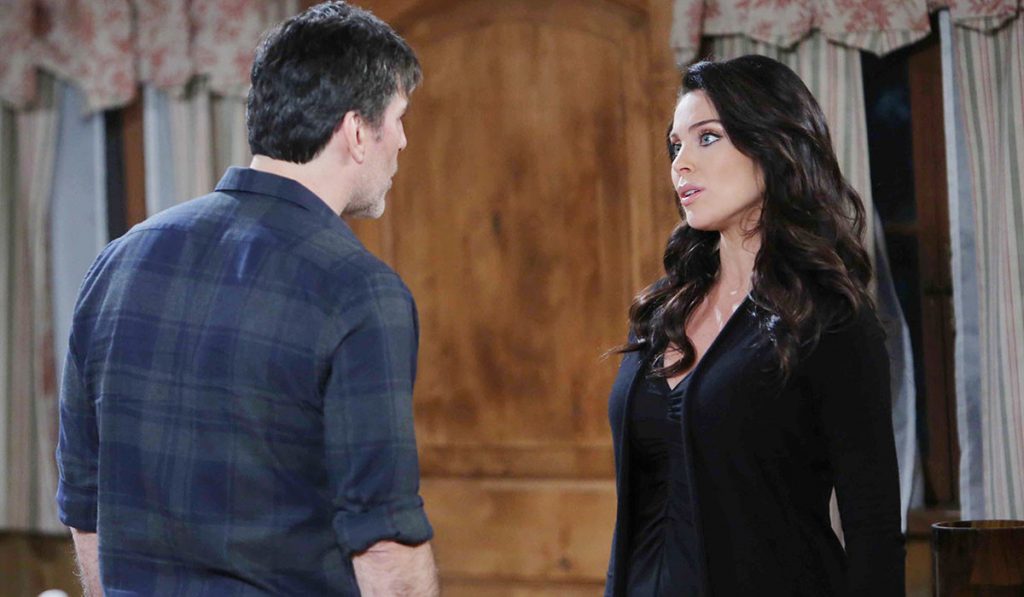 Days of Our Lives spoilers tease that Chloe Lane (Nadia Bjorlin) will have some earth-shattering, life-changing news for Brady Black (Eric Martsolf); apparently someone will give her an offer too good to refuse and she’ll be leaving Salem to take that offer! Will this be goodbye?

Nadia Bjorlin, who practically grew up on the show and has been with Days Of Our Lives off and on since 1999, recently confirmed the rumor that she was leaving, and while the exact exit date is not known, it will be near the end of August or the beginning of September 2019. Therefore, unless she changes her mind and reprises Chloe at some time in the future, this will be goodbye to Salem and to Brady!

As Days of Our Lives viewers know, Chloe Lane is a very talented opera singer and the offer she will receive may be connected to her talents. Perhaps a famous opera company, either overseas or far from Salem will offer her an opera singing job and she will not be able to resist the opportunity to follow her dreams! Moving far from Salem and possibly taking a job with a famous opera company, possibly a touring one, would certainly fit the description of a life-changing offer!

Brady was Chloe’s first husband, and they were married from 2005-2008. Prior to that they were high school sweethearts and Chloe was in the middle of a high school romantic triangle for a time between Brady, then played by Kyle Lowder who recently vacated the role of Dr. Rex Brady, and Philip Kiriakis, then played by Jay Kenneth Johnson and later replaced by Kyle Brandt. Chloe was also married to Lucas Horton (Bryan Datillo) and Daniel Jonas (Shawn Christian), with whom she had her son, Parker Jonas (Christian Ganiere). However, Brady has carried a torch for Chloe at times and has unsuccessfully tried to reconcile with her, although she remains a close friend. It is this close friendship that will compel her to tell Brady about her good fortune, and that she is leaving town and it may be goodbye for good this time!

Days of Our Lives viewers will recall that when Chloe and her children Parker and Holly Jonas (Scarlett and Harlow Mallory) were living at the DiMera mansion with Stefan DiMera (Brandon Barash) one of the main reasons they initially connected so well was because they had both grown up orphans; Chloe, however eventually found and reconnected with her birth parents; her mother, Nancy Wesley (Patrika Darbo) who occasionally took care of both Parker and Holly; and her father, Dr. Craig Wesley (Kevin Spirtas) whom Chloe sought with Brady’s help when she was diagnosed with leukemia and required a bone marrow transplant. She recovered fully and has had no re-occurrence of the leukemia.

Chloe’s last air date should be announced in the next couple of weeks; stay tuned to Days of Our Lives and keep checking Days of Our Lives spoilers frequently for all the latest news, updates and developments!