Days Of Our Lives Spoilers And Recap Wednesday, May 8: Rafe Gets Suspended – Nicole Blames Eric For Holly’s Death 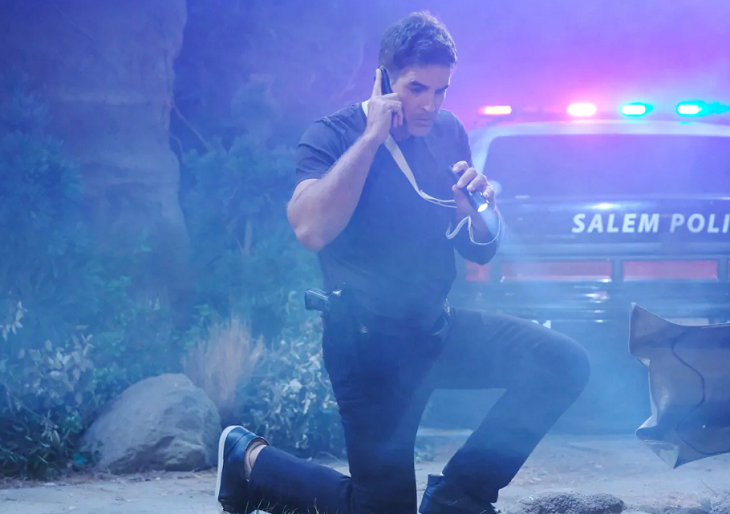 Days of Our Lives (DOOL) recap for Wednesday, May 8, 2019, reveals Ben Weston (Robert Scott Wilson) geta a call that Holly Jonas (Harlow and Scarlett Mallory) got killed in a car accident.

Ciara Brady (Victoria Konefal) offers to go with Ben to tell Stefan Dimera (Brandon Barash) and Chloe Lane (Nadia Bjorlin) about the accident. Ben goes to the mansion and tells Chloe and Stefan about the accident. Stefan asks how the bodies could be identified so quickly. Ben lets them know that Nicole already knows. Chloe takes sleeping pills and goes to bed asking Stefan to stay with her.

Days of Our Lives Rafe Hernandez (Galen Gering) asks Hope Hernandez (Kristian Alfonso) how Nicole Walker (Arianne Zucker) is supposed to get past this, Hope says you never do. Eric Brady (Greg Vaughan) tells Nicole he’s sorry, Nicole slaps him and tells him he doesn’t get to say that. Nicole asks Hope how this happened. Eric believes Nicole has to blame the kidnappers.

Days Of Our Lives Spoilers – Eric Brady Defends His Decision

Rafe gives Hope his gun and badge. Rafe accuses Hope of doing this because of their problems. She claims she hates that it came to this and starts to walk away. He tells Hope this marriage isn’t working and they need to make the separation more permanent. Hope asks if that is what Rafe wants, he says it’s what she wants. Hope doesn’t want to be sad anymore and walks away.

Days of Our Lives Nicole and Eric go back to his apartment, and she wants to know how this could have all gone wrong. Nicole says she wishes she had blown up in that building. She tells Eric she thought Holly would be safe with Eric and have a full and happy life. Nicole doesn’t understand why Eric let Chloe have Holly. Nicole demands to know why Eric didn’t keep his promise to her. Eric holds Nicole as she cries. Eric tells Nicole that he had every intention of honoring her wishes.

Days Of Our Lives Spoilers – Ted Laurent Gets Good News

We're still not over these stunning Daytime Emmy looks from our #DAYS family. | 📷: @victoriakonefal @salstowers @oliviarosekeegan

She says she gets it; there are things she didn’t know or didn’t remember. Nicole demands to know why Eric didn’t do anything when the cartel came after Chloe. Eric tells Nicole he stayed in Holly’s life but didn’t interfere with the custody. Eric tells Nicole this wasn’t Chloe’s fault, Nicole says no, she blames him. Nicole tells Eric that Holly was in danger and he did nothing. Eric tells Nicole to blame him if she wants and tell him he didn’t help Holly when she needed him. Nicole screams that her daughter is dead because he broke his promise to her and leaves.

Days of Our Lives Ted (Gilles Marini) asks how Xander pulled this off. Xander tells Ted the bodies came from the morgue, his partner is very resourceful. He tells Ted that he’s working with Julie Williams (Susan Seaforth Hayes), Ted doesn’t believe him. Xander says Ted is better off not knowing. Ted is sure this is the end of Rafe and Hope. He pays Ted, and he’s preparing to leave when Hope shows up asking what he is doing there. Ted claims to be there because he lost Holly. Hope tells Ted her marriage is over. Ted tells Hope he’s sorry and holds her while she cries. Rafe takes off his wedding ring and throws it.

Days Of Our Lives Spoilers – Maggie Kiriakis Blames Her Husband

Days of Our Lives Maggie Kiriakis (Suzanne Rogers) is at Doug’s Place with Victor Kiriakis (John Aniston) and Kate Roberts (Lauren Koslow). Victor says Holly would be alive if Chloe hadn’t shacked up with Stefan. Maggie tells Victor that Chloe is there because of him.

Kate tells Maggie she shouldn’t be blaming anyone at a time like this. She says if Chloe were a decent mother, she would have let the kids there without her. Kate accuses Maggie of not protecting her grandchildren. Maggie asks Victor to go home with her; Victor offers to send Maggie with the driver and have him come back for him.

Days Of Our Lives Spoilers – Kate Roberts Toasts To Holly

She leaves telling Victor she will see him at home. Maggie arrives home and holds Holly’s photo as she cries. Maggie hears Kate blaming her and pours herself a drink. Meanwhile, Kate toasts to Holly and Victor agrees. Maggie pours the drink out and runs out of the room.

Days of Our Lives Spoilers: Maggie And Victor At War Over Holly’s Death https://t.co/5WspF9rKw2 pic.twitter.com/94C22MAKeG

Days of Our Lives Ben and Ciara go back to his cottage. Ben thanks Ciara for being with him. Ciara tells Ben about her brother who was killed by a car before she was born. She says Hope never got over that. Ciara says Chloe is blaming herself, and Ben blames himself too. Ciara tells Ben he did everything he could to protect them.

Ben says it won’t bring Holly back. Ciara questions if Ben is going to try to sleep tonight. Ben tells Ciara he should be a part of baby David’s life. Ben asks Ciara if that is a terrible idea, she says it’s incredible. Ciara begins to kiss Ben. Ciara offers to speak to Rafe for Ben. Ben thanks Ciara, he doesn’t know what he would do without her.

Young And The Restless Spoilers & Recap Wednesday, May 8: Tessa Deals With Mariah’s Stalker- Sharon Opens Up To Rey About Her Past