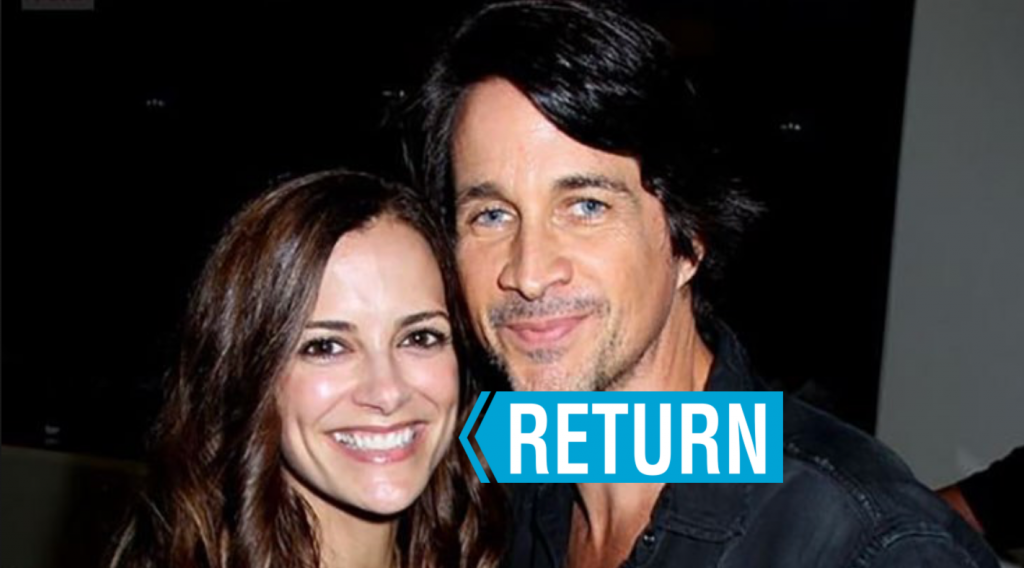 General Hospital spoilers tease that just in time for Dr. Hamilton Finn (Michael Easton) to maybe get his engagement ring for Anna Devane (Finola Hughes) back from that rascal of an ex-husband of hers, Robert Scorpio (Tristan Rogers) and finally try to propose, he’ll likely get interrupted by the second coming of Hayden Barnes (Rebecca Budig)! She may even show up and interrupt their wedding, if they choose a day in the summer!

Entertainment Weekly was the first to report that General Hospital will bring back Rebecca Budig to reprise Hayden sometime this summer, although an exact date has not yet been announced. Hayden (and Rebecca) left General Hospital’s Port Charles right before she and Finn were to get married, in September 2017, when her ex-husband Jared Preston Jr. (Rob Corboy) tracked her down to Port Charles and blackmailed her with the fact that he did time for her driving drunk and killing a pedestrian walking her dog. At the time, Hayden was pregnant with Finn’s child, and she never told him the child lived; she let him think she miscarried.

Several months ago, Hayden had written a letter to Finn in care of Curtis Ashford (Donnell Turner) wanting him to come meet her overseas where she was living at the time. General Hospital viewers can guess it was to tell Finn the truth of why she left him at the altar and about their baby, who would be a toddler by now. Finn instead chose to travel with Anna on a case, even though Anna had urged him to go meet with Hayden so he could get some closure on what had happened and why she left.

Apparently if Hayden is returning to Port Charles, as would be assumed, her issues with her ex-husband must have been resolved, although General Hospital showrunners have not hinted at a storyline, only at a return; it’s possible that Finn and possibly Anna with him will go to Hayden instead. Neither have the General Hospital powers that be disclosed if this this is a contract or a recurring role for Rebecca Budig.

"Have you heard from Hayden lately?" #GH pic.twitter.com/DRCtcKvHzx

However, with the timing of Finn and Anna being serious and a possible wedding taking place, General Hospital won’t be surprised if once again writers have Hayden show up to stop the wedding! They’ve done it many times before! Stay tuned to General Hospital and keep checking General Hospital spoilers frequently for all the latest news, updates, and developments!

Days Of Our Lives Spoilers And Recap Wednesday, May 8: Rafe Gets Suspended – Nicole Blames Eric For Holly’s Death