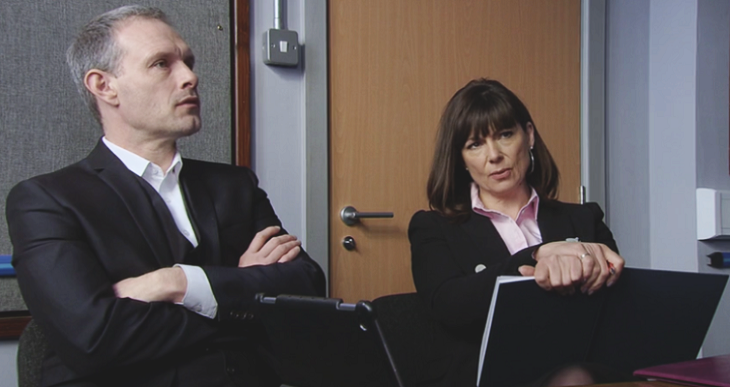 Paula reappeared on screen as Nick Tilsley’s (Ben Price) lawyer, after he was arrested by the police and questioned about the Underworld roof collapse. Hiring Paula as Nick’s lawyer was Sally Metcalfe’s (Sally Dynevor) idea.

She had overheard Nick tell his girlfriend Leanne Battersby (Jane Danson) about his dilemma. She recommended her lawyer who defended her in her fraud case to help Nick.

Viewers of “Coronation Street” may recall that Sally found herself at the center of a fraud case. It all started when Duncan Radfield (Nicholas Gleaves) approached her and applied for a council fund for his fake charity, which supposedly helps loved ones of stroke victims.

Having no idea that it was all a scam, she gave over £40,000 to Duncan, who ran off with the money. When the police caught him, Duncan framed Sally and told the police that she was involved in the scam with him. Sally went to jail but was eventually freed with the help of her lawyer, Paula. During that time, Paula got into a relationship with Sally’s daughter, Sophie Webster.

Paula ended her relationship with Sophie at the end of Sally’s trial. The couple hasn’t been going along too well after Sophie angered the judge handling Sally’s case. Their relationship soured even more after Paula found out about Sophie’s plan to have Sally pretend that she was injured so the case would be adjourned. Paula hasn’t been back to the cobbles since Sally’s release from prison.

With her return, fans of “Coronation Street” can expect a reunion. The former couple is set to reunite next week as Paula pays a visit to Speed Daal to see Sophie.

Photos released on the show’s official website hinted that the couple will give it another go and they will inform Sally and Tim Metcalfe (Joe Duttine) about it. Also, the couple will go on a romantic pony trekking holiday together in Spain.

Will Sophie and Paula make their relationship work the second time around? How will Sally react? Will she give the couple her blessing?

General Hospital Rumor: Chase And Valerie Take Down Margaux And Dawn Of Day?

Days Of Our Lives Spoilers: Will Needs Rolf’s Diary – Will Xander Hand It Over?