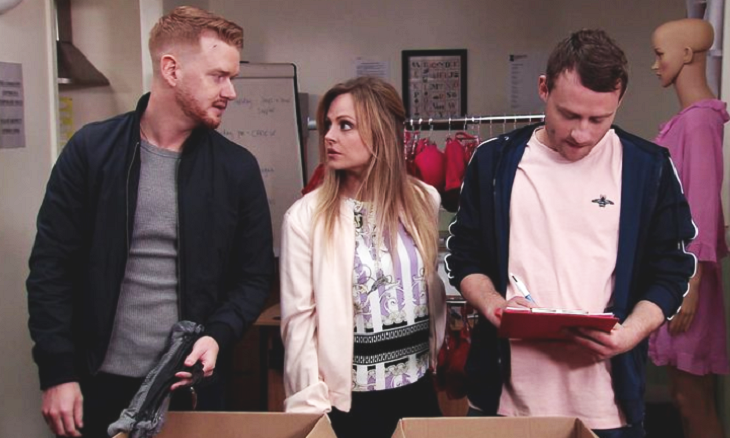 Coronation Street spoilers finds Sarah Platt (Tina O’Brien) in a very difficult position, as two men will be fighting for her affection.

Even though she has Gary Windass (Mikey North) that she can count on for support, it appears as though Nick Tilsley’s (Ben Price) true colors will be coming out while Adam Barlow (Sam Robertson) will also hope that he has a chance to woo her.

Sarah will turn against nick after she finds out that he had something to do with the disappearance of Audrey Roberts’ (Sue Nicholls) inheritance money. Sarah will tell Nick that she wants nothing to do with him and will run the factory herself.

However, Gary’s attitude will end up infuriating Sarah prompting her to put a little distance between them. Coronation Street spoilers indicate that Gary will grow both furious and jealous when he finds out that Sarah and Adam have been spending one-on-one time together.

Coronation Street Spoilers – Who Is The Better Choice?

As a matter of fact, the two will head to a hotel for a very special date night. It’s a love triangle that will definitely keep Sarah guessing as to which man is the better choice for her.

Peter pleads with DS Beckett to take it easy on Carla, but is she able to face the police?#Corrie #Carla #Peter #Carter #TheTruthHurts pic.twitter.com/xrBV8Bpk77

Elsewhere, Carla Connor (Allison King) will continue to struggle with her mental health. Even though she has Peter Barlow (Chris Gascoyne) by her side, the two will end up making a decision that will alter the course of their future together.

Peter will go to lengths to make sure that Carla will get the help that she needs before the two of them leave Weatherfield together.

Before Peter leaves, his son Simon Barlow (Alex Bain) will unexpectedly show up and announce that he is leaving the cobbles with his father.

Also, fans can expect to see Gemma Winter (Dolly-Rose Campbell) turn up but unfortunately she will be consumed with nausea. This will leave Chesney Brown (Sam Aston) horrified as he will rush her to the local emergency room to see what is going on.

Could Gemma be expecting a little bun in the oven? Or perhaps several more maybe? Coronation Street fans will have to tune in to find out what will happen next!