As a matter of fact, many people have noticed that Geoff has kept rather quiet about his past ever since he came to Weatherfield. But after his son Tim Metcalfe (Joe Duttine) made a rather devastating admission during the most recent episode, there’s a chance that Yasmeen might be involved in this. Here’s what you need to know.

So far Geoff has settled in quite well in his new life on the cobblers but that might all change soon. Even though he’s now living with Yasmeen, he did show a little hesitation in their relationship at first.

Geoff has even shown a little of his dark side in recent weeks. He lost his temper when he tried to organize a date night for Yasmeen, only for her to ruin the entire moment by asking her granddaughter Ayla Nazir (Sair Khan) to join them. 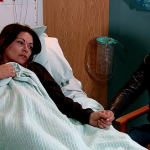 Coronation Street Spoilers: Carla Connor Must Make Her Mental Health A Priority– Will She Give Underwold Away?

There’s now speculation that there might be a new domestic violence storyline brewing for Geoff and Yasmin. In fact, Geoff’s son Tim even revealed a little secret about his father that he has been keeping to himself since his childhood.

Batten down the hatches – Ed, Aggie, Michael and James have landed on the cobbles!

Recalling a story about a dog he once had, Tim said that Geoff said the pet was too expensive to keep around. Plus, he couldn’t be bothered to walk it every day. That’s when he decided to get rid of the dog behind Tim’s back. Apparently, he is looking to do the same thing with Yasmeen’s beloved horse, as the two of them can’t afford to keep it in a proper stable. Yasmeen will be feeling torn apart over the decision.

Many are concerned for Yasmeen and that’s not just because Geoff controls all of the finances decisions in their relationship, but because he’s also very domineering, too. If he doesn’t like something, he simply gets rid of it. Tim is worried that Yasmeen might soon see Geoff’s ugly side, just like he did so many times in his own childhood. Needless to say, fans will find out the truth soon enough!

Days Of Our Lives Spoilers: Ben Is At The Right Place At The Wrong Time — Eli Forced To Arrest Him!

Days Of Our Lives Star Bryan Dattilo Gets Into An Accident!