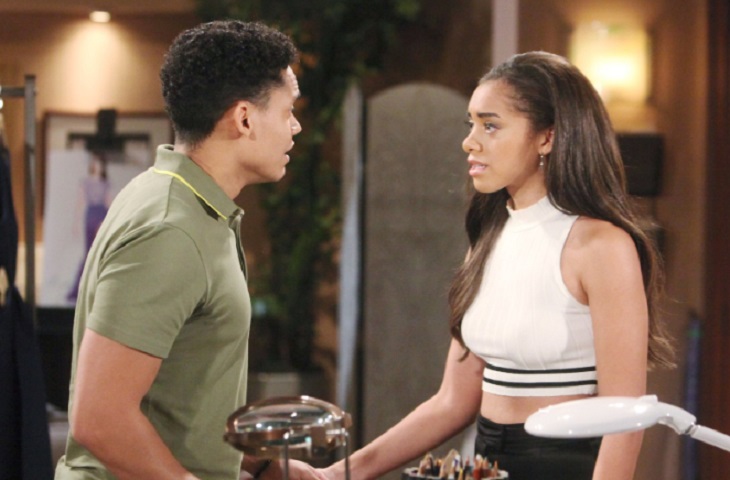 Flo Fulton Logan (Katrina Bowden) is wallowing in repressed anguish on ‘The Bold and the Beautiful’. While she loves the lifestyle that is connected to having become a member of the Logan family and has renewed her love with Wyatt Spencer (Darin Brooks), she did something truly terrible in the recent past.

The above makes her swig of liquor and intent to tell Hope Logan (Annika Noelle) the truth about who Phoebe Forrester (Madeline Valdez and River Davidson) is a real threat. That’s why Zoe Buckingham (Kiara Barnes) must play prevent defense once again.

Bold and the Beautiful Spoilers – More Than A Mistake

She wasn’t thinking straight around Reese Buckingham (Wayne Brady). Flo’s feelings, which came before she reconnected with Wyatt, were tied to Brady’s recurring character.

Reese was in trouble because a bad gambling habit created a debt of two hundred large. The people he owed money to gave him some time to make payment in full. He kept delaying until his daughter’s life was threatened.

Zoe was targeted and the bad doctor decided to steal the just-born child of Liam Spencer (Scott Clifton) and Hope. Flo was asked at a later point to pretend to be Beth Spencer’s birth mother, which was more than a mistake.

Bold and the Beautiful Spoilers – Ups and Total Downers

Flo entered a part of her life that also went up in more ways than one. She happened upon Wyatt, who encouraged her to explore the mystery of her biological father.

A few keystrokes here and some others there and Flo added Logan to her full name. The link to Wyatt also proving to be more than friendship, he ditched Sally Spectra (Courtney Hope) and fell back in love with his one-time high school sweetheart. B&B also fans took note of the lengthening of Wyatt’s backstory as a means to propel Flo’s arc.

However, despite both great points in her evolving life, Flo’s terrible choice to pose as Beth’s birth mother created total downers. She committed crimes, that the aggressive manipulator Thomas Forrester (Matthew Atkinson) is using as ammunition to maintain her silence. Plus, the link to the Logan’s means that Flo continues to knowingly lie to Hope and her family.

Zoe has not been overreacting every time she’s reacted strongly to Flo’s utterings about telling Hope what really happened on Catalina Island. Reese and Flo did they both would face arrest and almost certain prosecution if Hope, Liam, any of their loved ones, or real friends ever learns what really happened. Zoe could also be tagged as an accomplice as well.

So, when Flo’s inebriation lessens her defenses she’ll be geared toward unburdening her mind. Zoe, ever-hoping to keep her father’s crime a secret, will once again be called into action. But how many times will Barnes’ pressured character be able to stop this reveal from dropping?

The Bold And The Beautiful Spoilers: Liam And Hope Split Looms – Steffy’s…