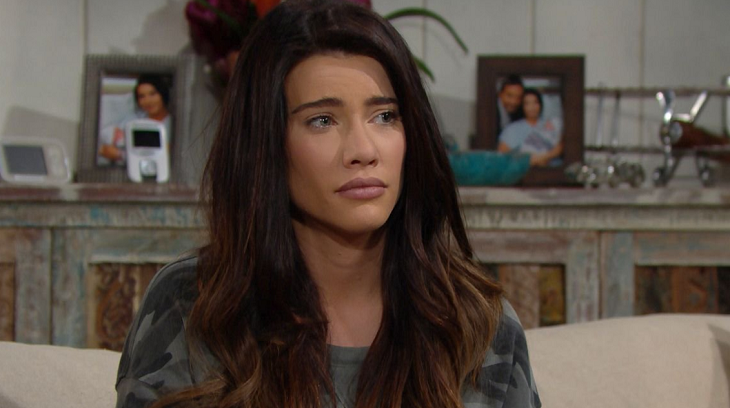 The Bold and the Beautiful spoilers indicate that Steffy (Jacqueline MacInnes Wood) will resort to drastic measures to keep baby Phoebe (Beth) once the baby swap is revealed.

It’s only been a few weeks since Dr. Reese Buckingham (Wayne Brady) told Hope that Beth was stillborn and then conned Taylor and Steffy into adopting the child.  Since then, many more people have been let in on the secret. There’s Reese, the mastermind behind the scheme. Plus, there’s Flo (Katrina Bowden) who is posing as the child’s birth mother. And last but not least, there’s Zoe (Kiara Barnes), who is torn between keeping her dad’s secret and revealing the truth.

With Flo and Zoe having doubts, it’s only a matter of time before one of them reveals the truth to Hope (Annika Noelle) and Liam (Scott Clifton). When the truth is revealed, Hope and Liam are going to want Beth back, but Steffy isn’t going to give up without a fight.

Steffy has grown close to the little girl, who she named after her sister. All she ever wanted was to do was give Kelly a sister so her daughters could grow up close like she and Phoebe did.

Now, her dream is going to be shattered once the baby switch is exposed.

Bold and the Beautiful Spoilers Friday, March 8: Taylor Lobbies For Steffy To Reunite With Liam – Flo Wants To Tell Hope The Truth

Unable to give up baby Phoebe, Steffy may decide to go on the run with Kelly and her sister. She doesn’t want to lose her family, but that’s what’s going to happen if Hope get Beth back. Hope will be furious when the truth is revealed and she’ll want to keep Beth away from Steffy.

Bold And The Beautiful – Will Steffy Go On The Run And Start A New Life?

Going on the run with Phoebe and Kelly is the only way Steffy will keep her family intact. She has the resources to go anywhere she needs to and she can start a new life with her daughters.

While Steffy thinks she’s doing the right thing by running away, in the long run it’s going to cause more trouble for her, and it may lead to her losing both Phoebe and Kelly.

The Bold And The Beautiful Spoilers: Zoe Kept The Beth Secret — Should She Face Charges?#BoldandBeautifulhttps://t.co/UqJyKJRP98

Young And The Restless Spoilers: Rey’s Job Is In Jeopardy – Will He Lose His Badge?