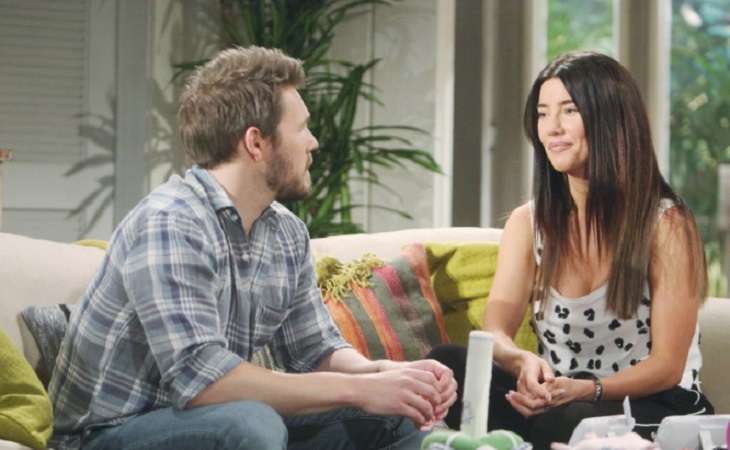 The Bold and the Beautiful (B&B) spoilers tease that Steffy Forrester (Jacqueline MacInnes Wood) and Liam Spencer (Scott Clifton) receive shocking news during the week of July 8. The news sends wishy washy Liam over to Hope Logan’s (Annika Noelle) house to beg her to give their marriage another chance.

Steffy isn’t sure what to make of Liam’s behavior. One moment he seems like he wants to be with her and the next, he’s professing his love for her. B&B spoilers tease Steffy will have to make a decision if she is willing to put up with her ex-husband’s flip-flopping again.

Bold and The Beautiful Spoilers – Liam Panics over Thomas’ Proposal

During the week of July 8, Liam will learn that Thomas Forrester (Matthew Atkinson) proposed to Hope. He will learn that he asked her to not only marry her but to raise his son Douglas with him. And, Liam knows that Hope wants to be a mother, so he begins to panic that she may accept Thomas’ offer.

The Bold and the Beautiful spoilers state that Hope admitted to Liam that she doesn’t love Thomas, but she wants to be a mother to Douglas. He tried to tell her that she cannot marry or commit to Thomas out of love for the child. However, Hope told him that he needs to go home and be with Steffy.

Steffy was shocked by the news that Thomas already popped the question. She wasn’t sure if Hope would accept his proposal. She hoped she would because Hope has a connection to her nephew.

Liam, however, refused to accept it. He mentioned to Steffy he was going to confront Hope about it and try to get out of her if she was going to accept it. Steffy warned him it was a bad idea as he needs to learn to back away from Hope, but Liam refused. He thinks Thomas is bad news and he has to do something.

The Bold and the Beautiful spoilers tease that Liam visits Hope and begs her not to marry Thomas. He professes his love for her [again] and urges her to stay away from Steffy’s brother. He thinks Thomas is toxic and evil.

Hope will brush off his comments and she will probably accept his proposal. Thomas can give her something that Liam can’t—she can be Douglas’ mother.

Can Liam stop Hope and Thomas from getting married? We have a very eventful week heading our way, so make sure to stay tuned to CBS The Bold and the Beautiful. Don’t forget to check often with Soap Opera Spy for all your latest spoilers, news, updates, and much more!