‘Bold And The Beautiful’ Spoilers: Ridge And Brooke Battle Over Baby Phoebe 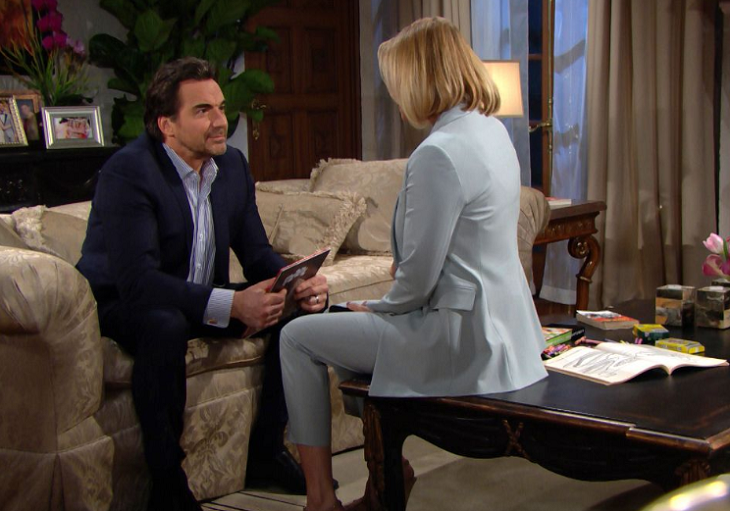 The Bold and the Beautiful (B&B) spoilers tease that Ridge Forrester (Thorsten Kaye) and Brooke Logan’s (Katherine Kelly Lang) marriage may come to an end after the Logan family demands Steffy Forrester (Jacqueline MacInnes Wood) hand over the baby she adopted from Flo Fulton (Katrina Bowden).

Of course, Steffy will fight against it and, if the Logans ask her to do that, Ridge will have a big problem with it as well. Could this be the beginning of the end of Bridge? Here’s everything you need to know about what’s ahead on B&B.

After Brooke hears that Flo is a Logan, she immediately jumps to the conclusion that Phoebe is one too. And, she doesn’t think she should be adopted. B&B spoilers say that Brooke breaks down, thinking about Storm’s grandchild being adopted by another family – even though that family is Steffy.

It’s pretty clear the rest of the family feels the same way. They understand why Flo decided to put her baby up for adoption, but now she has options. She doesn’t have to give up her child.

Flo will probably let them know that Phoebe is in good hands. She is with Steffy, who loves her dearly. However, Brooke and the rest of the Logan crew will probably put heat on her as well. Will they convince Flo to change her mind and ask Steffy to hand her baby back?

Bold And The Beautiful Spoilers – Will Flo Fulton Ask For Phoebe Back?

When Ridge gets wind of Brooke’s plan to take Steffy’s adopted baby away, he puts his foot down. He will let his wife know that she isn’t taking his adopted grandchild away from the Forresters. Of course, that won’t mean anything – Brooke will stop at nothing to force Steffy to hand over Storm’s granddaughter.

The big question is, will Flo do as the Logans ask and hand the baby over? Will they give Phoebe to Hope to raise as her own, not knowing she is rightfully her daughter? It would be a clean way for Flo to give Hope her baby back without assuming any guilt.

Bold And The Beautiful Spoilers: Will Baby Switch Reveal Lead To A Steam Reunion? https://t.co/Z2kGb1RIMS pic.twitter.com/vKuiNLcsHH

What do you think will happen next on B&B? Don’t forget to come back later for more The Bold and the Beautiful (B&B) spoilers, news, and casting updates!

Young And The Restless Spoilers: Neil Winters’ Story Comes To A Close – Tribute Episodes To Air Next Week