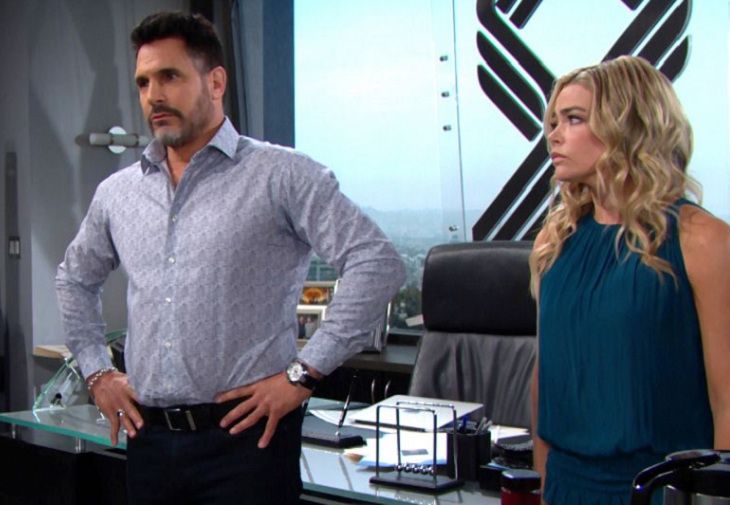 The Bold and the Beautiful spoilers indicate that Shauna Fulton (Denise Richards) will be staying in Los Angeles and her permanent move will bring her and Bill Spencer closer.

When Flo Fulton (Katrina Bowden) was searching for her father, Shauna revealed that she and Bill were involved at one time. Yet, as it turns out Bill wasn’t her father and Storm Logan (William deVry) is Flo’s dad.

Even though the paternity drama is over, that doesn’t mean it’s the end of Shauna and Bill.

With her daughter staying in Los Angeles, Shauna will decide to extend her trip. That means she and Bill will run into each other in town. The two will start to reminisce and it may stir up old feelings between the couple.

But there’s one person who won’t like it one bit – Katie Logan (Heather Tom).

Katie and Bill have been growing closer in recent weeks. With her marriage to Thorne Forrester (Ingo Rademacher) over, Katie has been spending more time with Bill and their son Will Spencer (Finnegan George). With everyone showing their support, it appears that Katie and Bill may give their marriage one more shot.

Bold And The Beautiful Spoilers – Will Shauna Fulton Be The End Of Batie?

However, Shauna may put an end to their budding reunion.

With Shauna becoming a permanent character on B&B, they’re going to pair her with a love interest. Out of all the men on the show, Bill is the top contender to be Shauna’s leading man since they have a history together.

If Shauna goes after Bill, it’s going to cause a lot of tension with Katie. After discovering that Flo is her niece, Katie and the rest of the Logan family have welcomed the girl with open arms. But Shauna getting cozy with Bill is going to cause Katie to become jealous, and the family will have to mediate between the two women.

Bold And The Beautiful Spoilers Tuesday, April 16: Flo Reveals A Secret – Bill Comes To A Realization About Quinn

Katie and Shauna’s battle over Bill will be tough for Flo because she wants to support her mother, but at the same time she doesn’t want to do anything to upset her aunt.