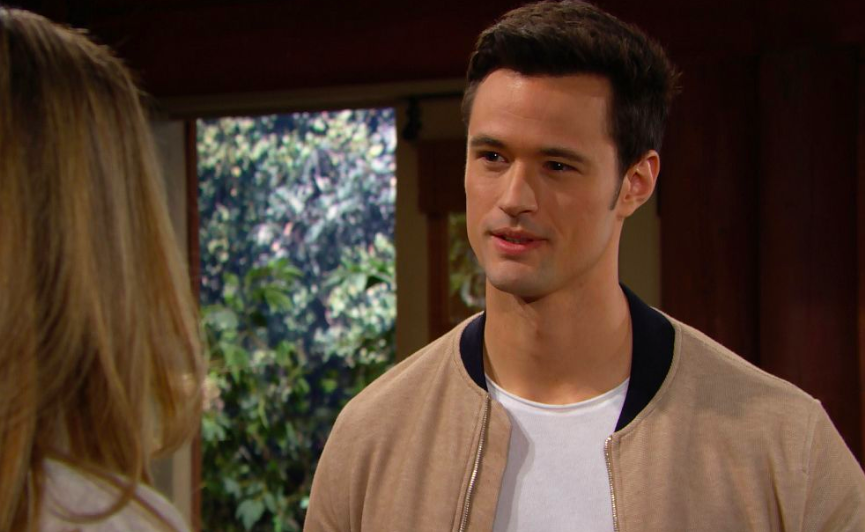 “The Bold and the Beautiful” (BB) recap for Friday, April 19, 2019 reveals that over at Brooke Logan Forrester’s (Katherine Kelly Lang) place, Thomas Forrester (Matthew Atkinson) tells Douglas he knows he misses Hope Logan Spencer (Annika Noelle)– he does too – they should go see her.

In the cabin, B&B’s Liam Spencer (Scott Clifton) hangs up from talking to the girls in Paris and Hope Logan Spencer says he should get on a plane and go see his family. They debate. Liam believes, right now, his place is with Hope. He relays he has a surprise for her later and reiterates the life he wants is the life he has with her.

After Liam has left, Thomas Forrester arrives with Douglas, who gives Hope a flower and hugs her around the legs. Hope tells the boy what a special place he has in her heart. When Douglas goes outside seeking a rock, Thomas tells Hope that his son’s dreams about Caroline Spencer (Linsey Godfrey) don’t upset him anymore thanks to her – she’s exactly what he needs. Hope admits the heart in her own heart isn’t getting smaller. 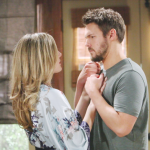 Talk turns to her guilt in keeping Liam from Kelly and Phoebe and says she told him he should be with them. Thomas thinks she is right. He knows the girls will have a great life with Steffy Forrester Spencer (Jacqueline Wood) but growing up without a dad isn’t ideal. B&B’s Thomas remarks on Hope’s selflessness and how she’s been there for Douglas…and for him. He switches gears to Hope for the Future. Hope would love to see his sketches.

Thomas thinks they could help each other and reveals he’s always thinking of her. Douglas returns, missing Caroline, and Thomas suggests some day there might be another woman in their lives to look after him. The boy asks, “Like Hope?” Thomas says, “Yeah, like Hope.”

Bold And The Beautiful Spoilers: Sally Spectra And Wyatt Spencer Catch Up

At the beach house, B&B’s Sally Spectra (Courtney Hope) home and dishes with Wyatt Spencer (Darin Brooks) on all the news since she was gone. Wyatt admits he’s grown concerned about Hope Logan Spencer and Liam Spencer – his brother needs to talk and he’s starting to think their marriage is in trouble. It seems like Hope is stuck and it might be taking a toll.

SNEAK PEEK at Next Week: Liam vows to Hope not to give up on their love.
Thomas grills Sally about what she knows of Hope and Liam’s relationship.
Quinn reminds Sally of her past mistakes. Bill heads to Il Giardino where he runs into Shauna and the two share a drink. pic.twitter.com/gPqs5TAEJ2

Liam arrives and they talk about Flo Fulton (Katrina Bowden) being related to Hope, and Phoebe’s birth mother being a Logan. Wyatt asks about Liam and Sally excuses herself, but Liam wants a woman’s perspective. He explains he’s trying to move forward but things aren’t getting any better. He and Hope love each other but there’s a wall between them that’s getting higher and higher – they’re not together on any level, including physically.

Wyatt thinks grief will do that. Liam agrees, but doesn’t know what to do. Wyatt suggests maybe they need a break. Sally wonders if he’s thought about going to see his daughter. Liam feels he should be with Hope, but Sally points out they’re his family too. Liam says Hope told him to go, but it’s not what she needs. He worries he’s letting someone down no matter what he does. And that’s a wrap. Don’t forget to check often with Soap Opera Spy for all your soap needs.