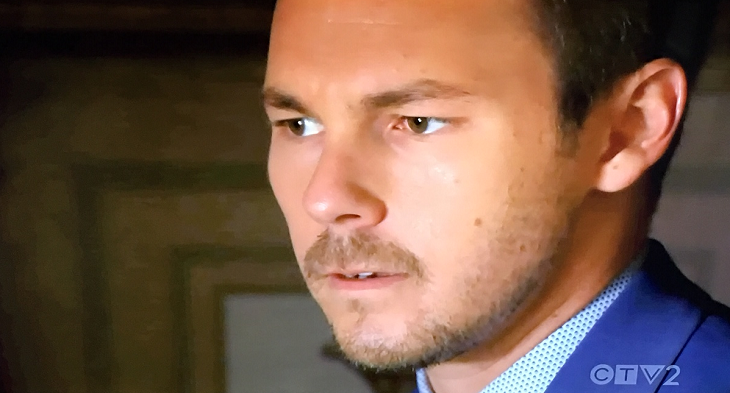 The Bold and the Beautiful spoilers tease that Liam Spencer (Scott Clifton) gets a clue that will lead him closer to learning that his daughter never died. He overhears Thomas Forrester (Matthew Atkinson) talking with Flo Fulton Logan (Katrina Bowden) about a secret, which helps advance B&B’s unfolding storyline.

B&B fans want this arc to end. But they also know the daily grind of a broadcast soap opera necessitates extended storylines that must be complex and play out slowly.

So, the next turn in the Phoebe Forrester (Madeline Valdez and River Davidson) is actually Beth Spencer tale appears. Dramatics at the rushed Thope wedding ceremony weren’t really about whether Hope Logan (Annika Noelle) would say yes or no.

The moment when Beth-Phoebe called Noelle’s character mama was foreshadowing. But what followed when a tuned up Flo arrived at Brooke Logan Forrester’s (Katherine Kelly Lang) house, which is where the nuptials took place, advances the arc.

Flo’s earlier tell to Zoe Buckingham (Kiara Barnes) at Forrester Creations does actually lead to a run-in with Thomas. He remains intent on keeping Flo, Zoe, and any other secret-keeper silent.

Thomas knows that if the baby swap secret ever gets out that he would likely be exposed. Any excuse he’d offer, claiming that his actions were intended for the best interests of Hope, would be swatted down and Thomas knows it.

So, his heated exchange with Flo is the latest in Thomas’ ongoing series of pointed conversations that are meant to intimidate. His push with Flo is that she would not only go to jail for being Reese Buckingham’s (Wayne Brady) accomplice, but that the Logan family would ostracize her.

Flo has repeatedly told Zoe that Hope deserves to know what happened to her child. Beth was not stillborn, as Reese claimed. She is living as Phoebe with Steffy Forrester (Jacqueline MacInnes Wood). Steffy remains unaware that the adoption of Phoebe was faked. However, Flo hasn’t actually followed through on any of her intentions. Thomas threat may change that. While Liam won’t hear the full details of Flo and Thomas’ verbal confrontation, he’ll relay the surprising information to Wyatt Spencer (Darin Brooks).

Bold and The Beautiful Spoilers: Steffy Tells Liam Story of Phoebe’s Adoption, He Gets Suspicious, Timing Is Off https://t.co/wB8tK4FYrg pic.twitter.com/j3z8DJQAgy

As fans recall, Wyatt has already expressed his feelings to Flo about not keeping secrets in a relationship. That’s why he opted to end Wally, which still bothers Sally Spectra (Courtney Hope). Flo’s spot at Wyatt’s revived true love will now place increasing emphasis on Bowden’s character’s potential to become the secret-breaker.