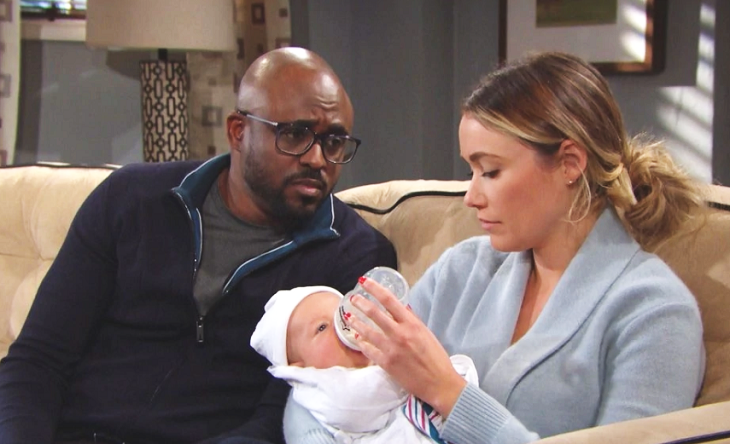 The Bold and the Beautiful (B&B) spoilers tease that Flo Fulton (Katrina Bowden) will reveal a clue to her past that could reveal the baby secret. Right now, the secret is about to come out, but not before a couple of clues come out first.

First, the scoop will come out that Flo had financial hardship before she came to Los Angeles. And, that’s not all. It will also come out that Flo once dated Reese Buckingham (Wayne Brady), the man who organized Phoebe’s adoption. Here’s what you need to know about what’s ahead on B&B.

Before Reese contacted Flo to help him pull off the scam of a lifetime, she had some real money troubles. B&B spoilers say that she was having trouble paying rent and keeping up with her bills.

When Reese told her he needed her to help him and in return she would get $50,000, for Flo, that was a huge payday. She couldn’t help but want to get her hands on the cash. And, she had this little crush on Reese, which he knew, and he used it to his advantage to convince her to pitch in.

She gladly did so, and it wasn’t until he had her sign the adoption papers for Steffy Forrester (Jacqueline MacInnes Wood) as Phoebe’s mother did she truly understand that she was stealing someone’s baby from them. Of course, that guilt only multiplied after she found out that Hope is her cousin.

One thing no one knows about the baby scheme is that Reese used Flo’s attraction to him as a way to manipulate her to do what he wanted her to.

Never in a million years would she have agreed to take someone’s child from them. But she wanted to make Reese happy. She believed, at least at one time, that he really cared for her. She also believed the real birth mother was a deadbeat.

The Bold and the Beautiful Recap, Tuesday July 16: Hope Moves Forward With The Wedding https://t.co/8Ni09ZcDOI pic.twitter.com/JouAjt8Lkz

Perhaps someone will find out that she was involved with Reese, the man who arranged the adoption, and begin to connect the dots. She may find a way to stay out of trouble with the Logans, Spencers, and Forresters after the secret comes out. Although right now, it is not looking like that is a possibility. Do you think either of these secrets could lead to the truth coming out?