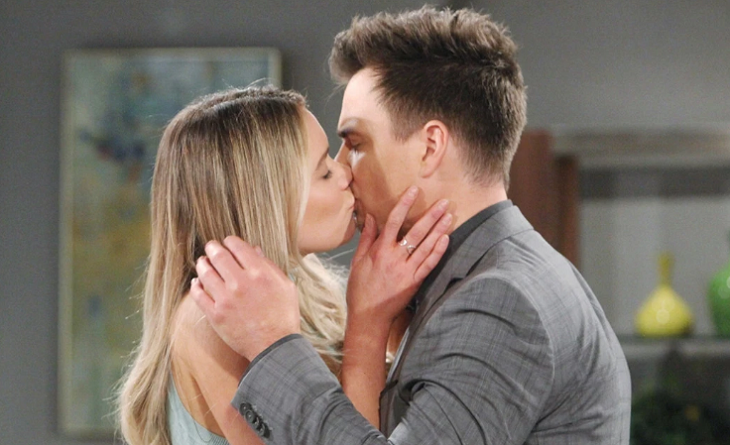 The Bold and the Beautiful spoilers tease that Florence “Flo” Fulton (Katrina Bowden) will soon have a whole new reason to feel guilty. She’s been feeling guilt pangs for months over her role in Reese Buckingham’s (Wayne Brady) baby swap and adoption scam. From the moment Flo found out that Reese had led Hope Spencer (Annika Noelle) to believe that her baby died, she’s felt terrible about being a part of the scam.

But Flo is in deep at this point. As B&B viewers know, she made a pact with Shauna Fulton (Denise Richards) and Zoe Buckingham (Kiara Barnes) to never reveal that Phoebe Forrester (Isabella de Armas and Rosalind Aune) is actually Hope’s daughter.

And she entered that pact for a good reason: she knows that she’ll likely face legal action if the truth ever comes out. Plus, she’ll ruin her good standing in the Logan family.

Bold And The Beautiful Spoilers – Earful From Wyatt Spencer

And soon, Flo is going to realize that she’s got another compelling reason to keep the baby secret. The Bold and the Beautiful spoilers say that she’ll soon get an earful from Wyatt Spencer (Darin Brooks) about his breakup with Sally Spectra (Courtney Hope). As B&B viewers know, Wyatt and Sally’s relationship ended because Sally kept a terrible secret from Wyatt.

As Flo is comforting Wyatt in the wake of his split from Sally, she’ll hear all about how frustrated and angry Wyatt is with Sally about keeping a secret from him. What Wyatt won’t know is that Flo is keeping a much worse secret than the one that Sally kept. Imagine Wyatt ever finding out that Flo kept a secret about Hope’s baby being alive!

Flo will know that Wyatt would never forgive her if he found out about her secret. And according to B&B spoilers, Flo will feel more and more guilty as she hears about the circumstances of Wyatt’s breakup. Wyatt may compare Sally to Flo, and he may even remark that at least Flo doesn’t have any big secrets or skeletons in her closet.

Bold And The Beautiful Spoilers – Flo Fulton Feels Like A Hypocrite

According to B&B spoilers, this will make Flo feel like a hypocrite, but at the same time she’ll really want a future with Wyatt. Flo never stopped loving Wyatt, and she’ll be torn as she wants to build a relationship with him while at the same time find a way to rid herself of the guilt she feels over her big secret.

It will be interesting to see which eventually wins out – Flo’s need to come clean or her desire to be with Wyatt. Do you think Flo will ever reveal the truth to Hope now that she’ll be embarking on a relationship with Wyatt?