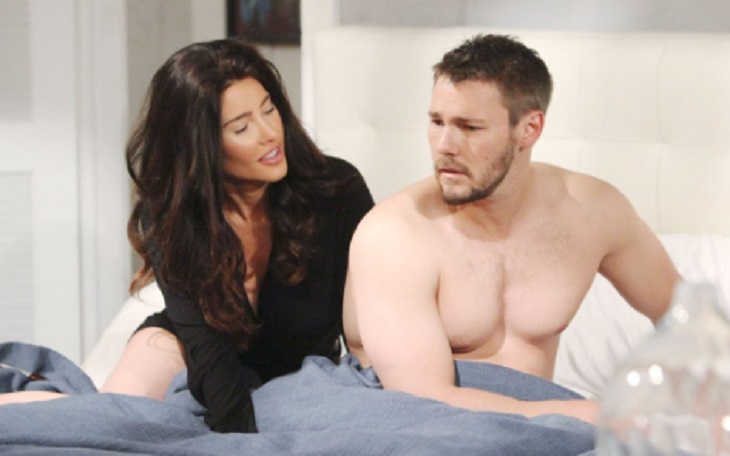 The Bold and the Beautiful spoilers tease that Thomas Forrester’s (Matthew Atkinson) shift from death to drugs will push Steam’s reunion ahead of schedule. With a zero level of sincere grief offered on Emma Barber’s (Nia Sioux) behalf, Thomas’ mind has already moved to the next step in his diabolical plan. Yes, he purchases drugs to use on Liam Spencer (Scott Clifton).

Ridge Forrester (Thorsten Kaye) and Brooke Logan Forrester (Katherine Kelly Lang) recognized one of Thomas’ friends, Vincent Walker (Joe LoCicero). He arrived at the door to Brooke’s palatial estate, which is near Mulholland Drive, in order to see Thomas.

Vincent is a shady side character who’s been written into the script as a plot vehicle for B&B’s writer’s latest take-down of Thomas. Lo Cicero’s role is to deliver drugs to Thomas.

As hardcore fans of the show recognize, Atkinson’s unstable alter ego never handled his mental health issues. That’s why he’s behaving as he is now.

This Fourth of July, come for the fun and stay for the fireworks! 💥 Don’t miss a minute of #BoldandBeautiful this week. pic.twitter.com/XTVsSIEhaU

Brooke sees that Thomas isn’t on the up and up. But she hasn’t been able to convince her husband, or daughter, Hope Logan (Annika Noelle), to share that insight. Hopefully, Brooke’s maternal instinct and persistence will allow her loved ones to escape Thomas’ forms of justice.

As for Liam, he’s no fan of Thomas, as Steffy Forrester (Jacqueline MacInnes Wood) knows. Liam told her that he doesn’t trust her brother, which is underscored in a way that won’t be immediately recognizable.

The drug purchase comment in the first paragraph of this feature wasn’t meant to imply that Liam made a request. Quite the opposite, as he won’t know that Thomas makes sure Liam receives a special mickey, intended to provoke him toward passion with Steffy.

Thomas’ plan, which is aimed at resealing Steam as soon as possible, has Steffy tying herself to Liam. The drug aid is intended to coerce cavorting weeks, if not months before this former couple would likely be ready for that step back into a serious relationship.

Bold And The Beautiful – Did Thomas Kill Steffy And Liam’s Reunion Before It Got A Chance To Start?

Knowing that they share one biological child in Kelly Spencer (Zoe Pennington and Allison Marcia Sweeney) and seeing that Liam is already serving as a step-father for Steffy’s perceived adopted child, Phoebe Forrester (Madeline Valdez and River Davidson), Thomas firmly believes that what he’s doing is best for all involved. If he can restore Steam soon, then Liam will be pushed off the table as a viable return option for Hope.

Thomas’ insecurities fuel his actions, including the use of his son as an emotional weapon against Hope. Being unable to cope with raising Douglas Forrester (Henry Joseph Samiri) on his own and following Caroline Spencer’s (Linsey Godfrey) now suspicious demise, Thomas is determined to force Hope into being Douglas’ new mother. That angle that will also make Hope his bride, he thinks.

The idea of Hope being linked to someone who’s deranged is deeply concerning. Brooke’s gut-feel is on target, though she doesn’t realize just how much of a threat Thomas is to her daughter’s life.