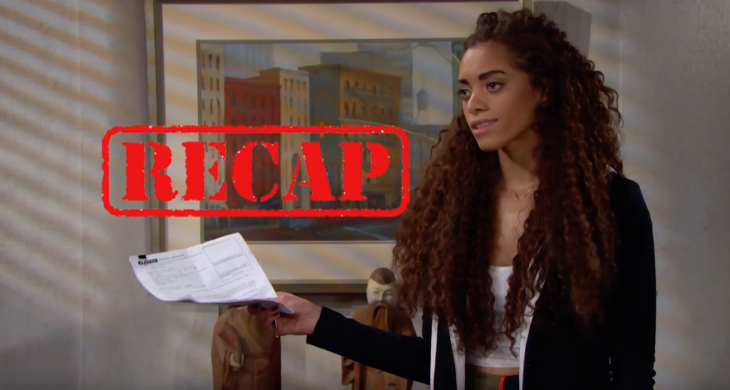 “Bold and the Beautiful” (BB) recap for Friday, February 8, 2019, reveals that over at the cabin, Hope Logan Spencer (Annika Noelle) can’t stop thinking of what it was like to hold Phoebe.

She urges Liam Spencer (Scott Clifton) to go spend time with Steffy Forrester Spencer (Jacqueline Wood) and the girls, but would like to go too. Liam’s uncertain and feels she should just relax, but Hope needs this. “I just want to hold that baby,” Liam assures her she’s welcome, he’s just concerned being around babies is a painful reminder of what they went through. Hope insists being around the girls helps. Liam takes a call from Steffy, but doesn’t get a chance to mention Hope because the girls fuss and she disconnects.

In Forrester Creations’ design office, Xander Avant (Adian Bradley) and Zoe Buckingham (Kiara Barnes) speculate on why Florence (Katrina Bowden) might have been living with her father. Zoe has a feeling he was mixed up in something bad and Flo was involved. She’s going back to the apartment. Xander offers to go with her but she declines.

At Dr. Reese Buckingham’s (Wayne Brady) place, Florence looks at the adoption paperwork and flashes to meeting Steffy Forrester Spencer and signing the documents. She hides them in a drawer and goes into the bedroom. Zoe Buckingham lets herself in, begins searching, and finds the adoptions papers. Florence reappears, startled, and Zoe confronts her about having the baby adopted by Steffy. She grills Flo about the date she had the baby, her doctor’s name, and points out she clearly didn’t give birth. She demands to know what’s going on.

Bold and Beautiful Spoilers Wyatt and Sally Discuss The Adoption

Over in bed at Wyatt Spencer’s (Darin Brooks) beach house he asks Sally Spectra (Courtney Hope) if she was joking about having baby fever. Sally reassures him and they agree they’d like kids…someday. They marvel at Steffy Forrester Spencer juggling two kids, and Wyatt muses it’s hard to see Phoebe and not think about Hope Logan Spencer and Liam Spencer’s baby. They discuss how fast the adoption went through and eat popcorn. After, Sally becomes pensive. She’s feeling bad about what Hope’s going through and wishes they could do something. Wyatt thinks she’s incredible. They make out.

Steffy Forrester Spencer welcomes Liam Spencer into the cliff house and jokes he can help fold laundry. Hope Logan Spencer appears and she hopes it’s okay she came. She says she wanted to see Phoebe. Steffy tells her she’s welcome anytime. Hope wants to see the baby but she is sleeping. Hope explains being around Phoebe helps lessen her pain. Liam and Steffy are worried, but Hope insists she’s fine.

Unable to get the child off of her mind, Hope asks Liam to take her to Steffy's to visit the baby. WATCH FULL EPISODE: https://t.co/SSKeqjBUtM #BoldandBeautiful pic.twitter.com/oTB50Wn4Ap

The baby awakens and Hope goes to get her. Steffy and Liam puzzle over whether this is healthy. Liam doesn’t know but it seems to help her. They watch and listen in the monitor as Hope cradles Phoebe and tells her about losing Beth. She forgets all of it when she’s looking at Phoebe. Liam turns off the monitor. Hope flashes to telling Liam she was pregnant then tells Phoebe, “I love you.”

‘The Bold and the Beautiful’ Spoilers: Darin Brooks Teases Wyatt Sees Future With…