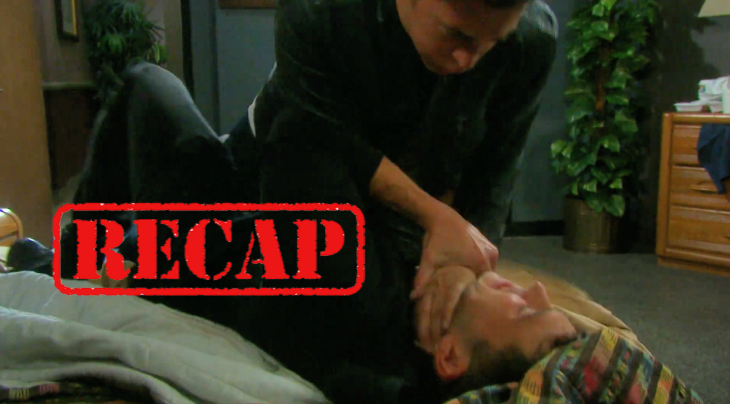 Days of Our Lives (DOOL) recap for Friday, February 8, 2019, reveals Doug (Bill Hayes) and Julie (Susan Seaforth Hayes) are watching Thomas (Asher Morrissette) while Abby (Kate Mansi) is trying to get information on Charlotte. Chad tries to console Abby and assures her they will find the baby. J.J. (Casey Moss) joins Abby and Chad. J.J. asks if they have any leads.

Chad says he talked to Stefan and he would have used it for leverage already. Chad thinks Ben (Robert Scott Wilson) is responsible. Abby tells them Ben wouldn’t do this. Jack (Matthew Ashford) comes and tries to comfort Abby. Abby goes off on Jack over not stopping by before. Jack leaves, Jennifer (Melissa Reeves) goes after him. Abby goes to check on Thomas.

Chad tells J.J. he went to talk to Ben earlier and doesn’t believe his story. Ben comes to talk to Abby after hearing that Jordan (Chrishell Stause) visited her. Ben wants Abby to know he didn’t kidnap Charlotte. Ben thought that Abby would understand his plight. Ben asks Abby is Jordan told her where she was staying, and she doesn’t know.

Days of Our Lives’ Ciara (Victoria Konefal) tries to play Jordan by pretending to believe her story about Ben. Jordan says she tried to keep Ben safe for years, but now he has become the monster. Ciara tries to get Jordan to untie her. Ciara says she needs to go to the bathroom and promises to help Jordan with Charlotte. Jordan starts to untie her.

Enemies on screen, friends behind the scenes! #DAYS

Jordan turns Ciara loose and warns her not to try to escape. Ciara grabs her phone and Jordan catches her. Ciara tries to get Jordan to let her text Chad, so he knows Charlotte is ok. Ciara begins to feel faint, and Jordan smiles. Ciara begs for help and Jordan admits to drugging her. Ciara asks why Jordan would do this; she claims to be protecting her from Ben. Jordan stands over Ciara with a syringe and says sleep tight. Ciara wakes up and is tied up again. Ciara starts yelling for Jordan and asks where she is.

Days of Our Lives’ Chad attacks Ben and demands to know where his daughter is. Ben tries to convince Chad he doesn’t have the baby, but he doesn’t listen. Eli (Lamon Archey) has to come in and pull Chad off of Ben. Eli tells Chad he has cops watching Ben. Chad threatens to kill Ben and leaves. Eli has questions for Ben. Ben tells Eli he didn’t know anything about the kidnapping until Chad came in the room and attacked him. Eli tells Ben that Jordan says he should be a suspect. Ben tries to call Jordan, and her voicemail is full. Ben is determined to find Jordan and let her know he is fine.

Days of Our Lives Spoilers Haley And J.J. Kiss

Days of Our Lives’ J.J. apologizes to Haley (Thia Megia) for not listening to her without downgrading her sister. Haley tells J.J. that Melinda wants to help people as she helped her. Haley tells J.J. she doesn’t want to be the reason Melinda loses the election. Haley says she knows J.J wouldn’t tell anyone. J.J. remembers his conversation with Jack.

J.J. starts to tell Haley what he did, but Jennifer calls and interrupts him. J.J. and Eli are in Ben’s room. Eli doesn’t have a search warrant, J.J. wants to search without it. Eli tries to back J.J. down. J.J. goes home and is very upset. Haley asks J.J. what is wrong, he explains about the baby and how he can’t help find her. Haley wants to comfort J.J., and they move closer and kiss.

Days of Our Lives’ Melinda (Laura Kai Chen) and Abe (James Reynolds) talk about the things going on in Salem at present. Melinda tells Abe he won’t be mayor long. Melinda stops by to visit Haley. Melinda wants Haley to let her find her another place to stay. Haley tells Melinda that she told J.J. the truth, she trusts him. J.J. comes in throwing things around. Eli joins Abe in the square, Melinda tells him to find the baby or Abe will lose his job come election day.

Days Of Our Lives Jack Leaves With Jennifer

Days of Our Lives’ Eve (Kassie DePaiva) encourages Jack about the race for mayor. Eve says Jack needs to force one of them to back out and swoop in for the kill. Jennifer comes to see Jack and tells him about Charlotte’s kidnapping. Jack asks what he can do, Jennifer tells him Abby needs her father, he goes with her. Jennifer takes Jack back to the hotel. 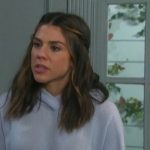