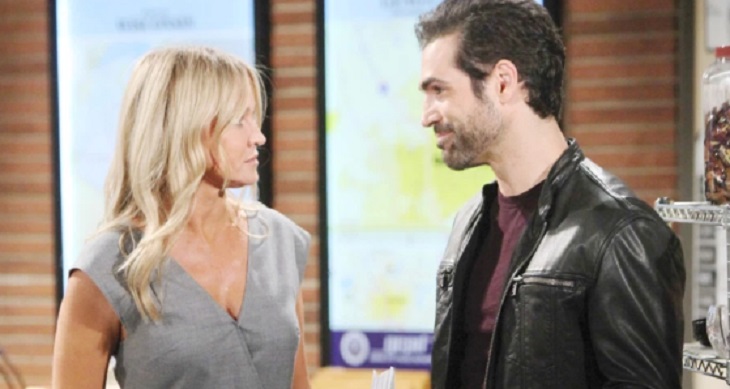 Give Mia (Noemi Gonzalez) some credit on ‘The Young and the Restless’. No, give her a lot of credit. She knows that Sharon (Sharon Case) is a threat to her marriage and isn’t about to lose Rey (Jordi Vilasuso) without a fight.

Oh, Mrs. Rosales is infuriated to be sure. But she’s already proven to be resilient in not allowing her husband to move to Genoa City without having followed him, moved into the cookie-cutter apartment he’s renting from Sharon, and then standing up, strongly, for her marriage.

Now, the Arturo (Jason Canela) matter was Mia’s fault. She’s admitted that and has been a bit too, well, what’s the word, open, about their personal business since injecting herself into this fictional Wisconsin town.

Young And The Restless Spoilers – Mia or Sharon

However, Sharon doesn’t have a smooth backstory, as longtime Y&R fans know. A stand-alone paragraph would be needed to reel off her many last names and complex personal connections. So she doesn’t have any real moral ground to stand on and can’t look down at Rey’s imperfect wife.

Sharon’s crack about Mia being jealous of Rey’s job was way off base. It was also said in the midst of the party thrown at the apartment that looms over Crimson Lights.

The above setup was meant to fully brighten the juicy drama Y&R has created by contrasting an existing, beloved character (Sharon) and the new lady in town, Mia. Gonzalez’ character is reminiscent of Case’s character in her early days, which is part of the fun.

Will today’s Sharon bond with Rey romantically? Probably, but not without engaging lead-in’s and concurrent Mia mayhem.

Case remains one of this iconic soaps most consistently great performers. Gonzalez has hit her marks out of the park since Day 1. Kudos to Y&R for pitting their characters against each other. This is great soap and viewers have only been given initial, opening salvos in what projects as an extended battle.

MUST WATCH General Hospital Preview Video Thursday, December 6: Ryan Furious With Laura, Warns Her To Back Off