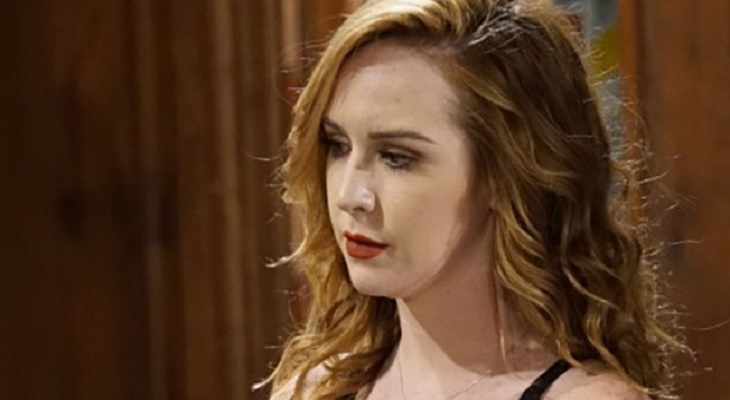 Sharon (Sharon Case) was wrong to throw-in with the coverup crew on Young and Restless. She was also misguided to go along with the Tessa (Cait Fairbanks) kidnap plot. But Sharon’s motherly instincts are heartfelt, whether Mariah (Camryn Grimes) agrees, or not.

When this entire J.T. (Thad Luckinbill) mess is finally resolved many Genoa City residents will be able to see everything, including whatever parts they played in this spring tragedy, far more clearly. Until then emotions will sway every day.

Mariah and Sharon understandably lost their trust in Tessa after she admitted to being the coverup crew’s blackmailer. Then, Miss Porter only came partially clean. However, unless evidence somehow proves her guilt at a later point, she didn’t move Mr. Hellstrom’s body and is not an arsonist.

Tessa couldn’t possibly have laid J.T.’s clothes in bed for Nikki to find on Young and Restless, a point that both Sharon and Mariah will soon learn. That plot point seems to further confirm that Tessa’s reckless actions are contained to the recent past and were committed to help pay off the coyotes who helped Crystal (Morgan Obenreder).

Miss Copeland was ready to ditch Tessa. Not wanting to ride a roller coaster, but simply try and live a normal life, it seemed that this connection was about to end. But then a frantic call was received.

Young And Restless Spoilers – Mariah Rushes Back To Tessa

Tessa’s tearful words and disheveled state moved Mariah, helping to instantly restore her faith in the future. Hopefully, for both parties involved, Tessa is being fully truthful this time. If she’s not, Young and Restless spoilers tease that Mariah is in serious danger.

On the other hand, if Mariah’s instincts about Tessa are proven true, then Sharon’s relationship with her surviving twin daughter have been damaged to an unknown degree.

Sharon has endured so much since Mariah came into her life in 2014. Possibly, all three parties will be able to resolve all differences and get along with each other whenever the J.T. Dies storyline ends. The rift Tessa has caused between Sharon and Mariah may simply dissolve by then, or shortly thereafter.