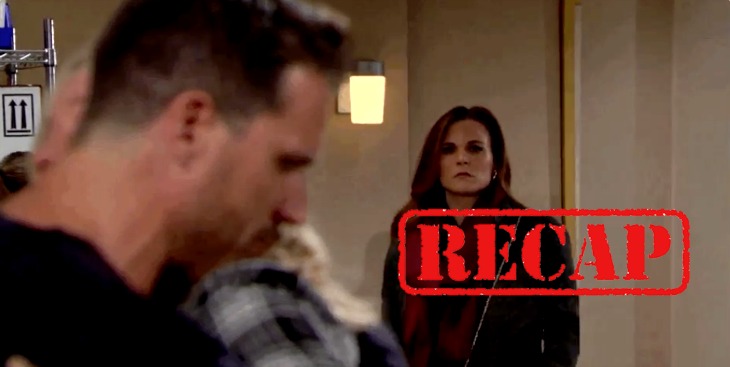 “Young and the Restless” (YR) recap for Friday, December 21, 2018 reveals that over at the hospital, Nate Hastings (Brooks Darnell) informs Nick Newman (Joshua Morrow) that his mother’s condition has not improved and her MS complicates things then says the longer she doesn’t wake up, the worse her prognosis.

Y&R Spoilers – Nick Suggests Victoria Get To The Hospital

At Victoria Newman’s (Amelia Heinle) house, Reed Hellstrom (Tristan Lake Leabu) listens as Billy Abbott (Jason Thompson) tries to persuade his mother to attend Johnny’s pageant before going to the hospital. When Victoria talks about not knowing Nikki Newman (Melody Thomas Scott) was drinking again, Reed blurts that it’s not her fault. Nick Newman calls and suggests Victoria get to the hospital soon. She agrees to Reed accompanying her.

Sharon McAvoy (Sharon Case) stops by the hospital to check in with Nick Newman, who tears up as he explains Nikki Newman is not waking up and he feels helpless. They hug as Phyllis Summers (Gina Tognoni) appears. They talk about Nikki being a fighter.

Today on #YR, Nick vows to protect his family and Arturo opens up to Abby. WATCH FULL EPISODE: https://t.co/ZAhqxOkt7Q pic.twitter.com/13laIBSV8q

Phyllis thanks Sharon for coming and Sharon remarks on putting issues aside at times like this. After Sharon’s gone, Nick doesn’t want Phyllis to read anything into her visit. Reed Hellstrom and Victoria Newman arrive. Nick tells Reed they still don’t know who did this. Victoria goes to Nikki’s bedside and apologizes for letting her take on all the family’s problems

Reed Hellstrom asks for a minute alone with Nikki and cries, “This is all my fault.” He confesses to her and admits he’s scared and ashamed…he can’t believe she could die because of him. Reed sobs that he loves her and is so sorry.

Outside the room, Phyllis Summers looks worried as Nick Newman fumes about finding the hit-and-run driver. Nate Hastings joins them and relays they need to get Victor Newman (Eric Braeden) there and prepare for the worst.

At Dark Horse, Arturo Rosales (Jason Canela) gives Abby Newman (Melissa Ordway) a gift and asks if she’d go to the Rosales holiday dinner with him. Abby thinks his gift was a bribe and doesn’t want a repeat of Thanksgiving. Arturo wants his family to see how strong they are together and prove he’s not a screw-up. Abby agrees to go. She opens her gift, which is a khaki parka. She loves it but hesitates when Arturo alludes to camping.

At Mia Rosales (Noemi Gonzalez) and Rey Rosales’ (Jordi Vilasuso) apartment, she’s looking forward to the holiday gathering and announces she invited Sharon McAvoy and wants to make friends with her. Kyle Abbott and Lola Rosales arrive. Kyle offers to help out but flounders when Rey asks how he is with plumbing.

The women assure Kyle he’s joking. Arturo Rosales and Abby Newman arrive. Mia tells Arturo his being there means a lot to Rey and remarks on Abby’s interesting coat. Abby reports it was an early gift from Arturo, chosen by Lola. They tease her about camping while Rey and Arturo plot to mess with Kyle. Sharon McAvoy arrives, and the women pour wine in the kitchen. Mia tells Sharon she and Rey are like newlyweds and explains she’d like to become friends.

Sharon McAvoy joins Abby Newman says, “Let me tell you what I know about Nikki, even if you’ve already heard it.” Meanwhile, Rey Rosales and Arturo Rosales grill Kyle Abbott about his intentions with their sister. Abby Newman joins them and backs up the men. Lola Rosales rescues Kyle, and Rey takes a minute with Sharon, but Mia interrupts. After, they all talk about family traditions.

The Rosales recall when Rey pulled over their mom’s favorite singer and got him to perform for her. Rey looks at Sharon as he tells the story and Mia Rosales interjects that they went skinning dipping that night. The gathering breaks up awkwardly when Rey doesn’t remember that, and Arturo and Mia look uncomfortable.

At the Athletic Club, Jack Abbott and Kerry Johnson toast and he presented her with a surprise. He wants to take her to a five-star resort on Bora Bora. Kerry is tempted but feels they’re moving at different speeds and needs to think about it. Jack wants her to feel confident and happy with her decision. She thanks him for dinner and leaves.

At Crimson Lights, Billy Abbott tells Johnny his mom will be proud to see him on video and they hope his grandmother will get better. Later, Rey Rosales catches up with Sharon McAvoy and gifts her with a keychain in honor of the road trip they never got to take and says even though he’s with Mia Rosales, she’s still important to him. Sharon feels the same way.

Rey Rosales returns to his apartment and tells Mia Rosales she should congratulate herself on a good night. She kisses him.

Kerry Johnson arrives at the Abbott mansion to accept Jack Abbott’s invitation to Bora Bora. She kisses him and says her bags are outside and they should start this adventure tonight. Later, in Jack’s bedroom, they make love. Downstairs, Abby Newman reveals her lingerie to Arturo Rosales and they head upstairs as well.

And that’s a wrap. Don’t forget to check often with Soap Opera Spy for all soap needs!