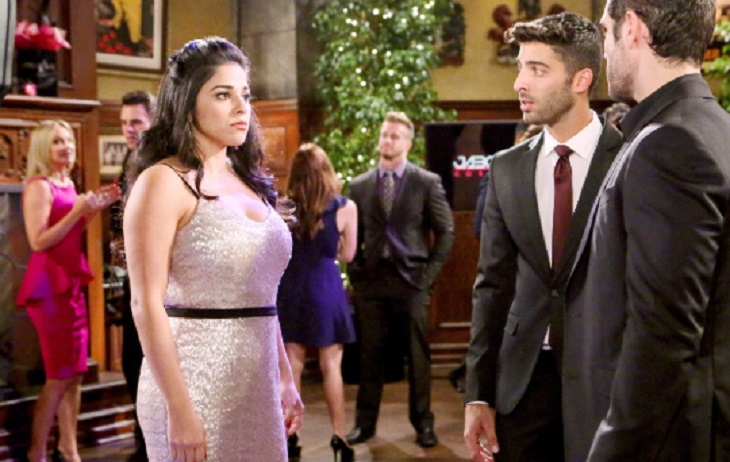 Mia (Noemi Gonzalez) isn’t shy about making her presence known throughout Genoa City on ‘The Young and the Restless’. She wants to make contacts with Y&R’s elite in order to further her career as a makeup artist. Meanwhile, the husband she has on a string seems to have split emotions.

‘Shey’ might have become a couple if Mia hadn’t arrived from Miami when she did. Sharon (Sharon Case) knew Rey (Jordi Vilasuso) was separated and didn’t expect his wife to suddenly show up. Since the debut of Gonzalez’ character, Sharon has been respectful of Mia’s protection of her marriage.

Rey is clearly still in love with Mia. She does care for him, but it could be that he’s her second choice, if that. However, it is too soon to tell if Mia’s push to make herself valuable among GC’s power players also means that she sees Rey as lesser life option.

Young And The Restless Spoilers – Is Mia Genuine

Maybe Mia truly does want to make her marriage work. But why tease Arturo (Jason Canela)? It could be that Mia is used to having men’s attention and either getting what she wants, or stirring hearts if she doesn’t.

Arturo has adamantly told Mia that they’re over. But his connection with Abby (Melissa Ordway) doesn’t hold deep history. So a ‘Marturo’ sequel can’t be fully ruled out. Some type of impulse action would likely spurn that dangerous and surely destructive reunion.

As for Rey, he likely was cultivating something with Sharon because he was hurt, vulnerable, and lonely. Three powerful motivators to be sure.

Young And The Restless Spoilers – Sharon or Mia?

Detective Rosales’ world was upended by Mia in Florida and now again in GC. His outreach to Sharon and quick revert to Mia demonstrate that he can transfer his emotions again.

Mia may, or may not prove to be the relationship decider. While she’s looking to gain business acceptance, Rey isn’t a client. He, not his wife, could end things if there are any further betrayals. Then again, Rey might simply opt for Sharon because he tires of Mia’s me-first games.

This is Us Spoilers: Randall and Beth In Trouble?