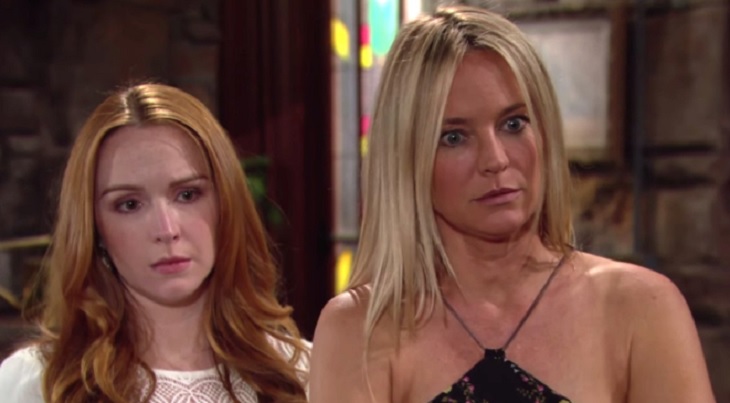 Sharon (Sharon Case) didn’t divulge the truth to Mariah (Camryn Grimes) on ‘The Young and the Restless’. Instead, she relayed the cover story Vickie (Amelia Heinle) developed in an attempt to protect Sharon, Phyllis (Gina Tognoni) and most importantly, Nikki (Melody Thomas Scott).

Even though J.T. (Thad Luckinbill) was supposedly dead, he was recently seen. How that possibly can be should soon be revealed on Y&R.

Mariah knew something was bothering Sharon for months. Viewers knew Grimes’ character was concerned because she referred to Sharon as mom, which she generally only does when a serious issue is at hand.

It was understandable that Sharon felt she was protecting her daughter in telling her the decoy story Vickie told Paul (Doug Davidson). The gist of that developed tale is that Vickie, acting alone, helped J.T. to escape Genoa City because she felt threatened and was confused on that fateful spring night.

Of course what really happened is that Nikki hit J.T. over the head with a fireplace poker. She did that after hearing loud voices coming from Vickie’s bedroom. Nikki, Phyllis, and Sharon burst into Vickie’s bedroom and Luckinbill’s character went down as a result of being struck from behind.

The four ladies mentioned in the above paragraph believed J.T. was killed by the blow. They panicked, Phyllis took control and convinced them to bury his body. Nikki went along with the plan because she believed Paul couldn’t be trusted to handle the matter objectively.

Mariah is smart and super savvy. The real details are sure to be learned now that she knows J.T. was present the night the ill-fated girls’ club was formed. When that happens, how many other characters also are clued in (and when, in each instance) will bleed through to this storyline’s coming climax. Hopefully that happens this month, or next.