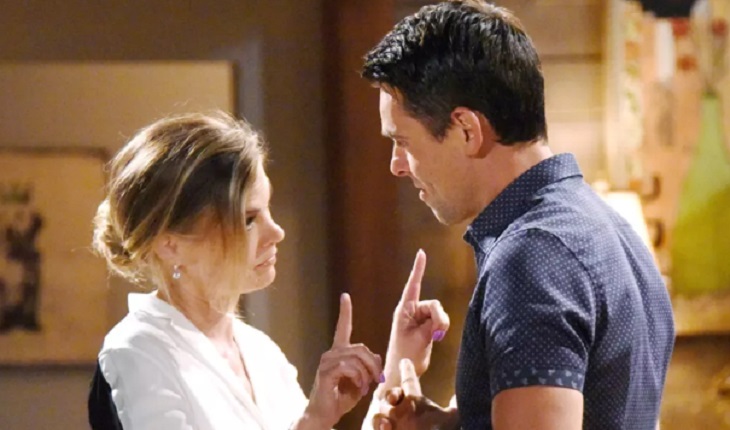 He’s already lost a ton of cash and a million-plus dollar yacht on ‘The Young and the Restless’. But Billy’s (Jason Thompson) personal luck is about to go south in a far more dramatic way when Phyllis (Gina Tognoni) learns what he’s been doing.

Summer (Hunter King) was the person who presented temptation to Billy. However, she wasn’t and isn’t responsible for his actions. He’s not a robot and has a brain. Therefore Billy, along with all humans, logically possess free will.

Billy opted to begin gambling again. He allowed himself to be pulled in by the thrill of the game and then another and another. Poker was his vice and has become so again this summer, pun intended.

Phyllis was distracted for a few hours by her daughter, but insisted on having dinner at the Genoa City Athletic Club. That was a mistake Summer made.

A man approached Summer during her disguised bonding session with Phyllis. He mentioned getting into the game that was happening upstairs and also began referencing her friend (Billy) before he was cut off. Summer responded quickly, spoke him away, and then told her mom a lie.

Summer played off that unwanted interaction as though she was just offered the chance to participate in a video game session. Phyllis has long been a gamer and wanted in. That part of her personality emerged when she looked like Michelle Stafford and first emerged during ‘Phick’s’ run.

Phyllis was initially talked out of going to the room where Billy was playing poker. However, after returning home, she then went back to the GCAC.

Almost, if not all gamblers lose. They willfully relinquish money, time, their dignity, and often, the trust of family members and close friends.

The Young and the Restless spoilers show Billy is about to lose all that he’s worked so hard to gain. In fact, he might even be forced to give up ‘Philly’. And no, that doesn’t refer to the horse Thompson’s character bought for Phyllis as part of an inside joke with the audience, which created and has furthered the name of this likeable, but potentially failing pairing.