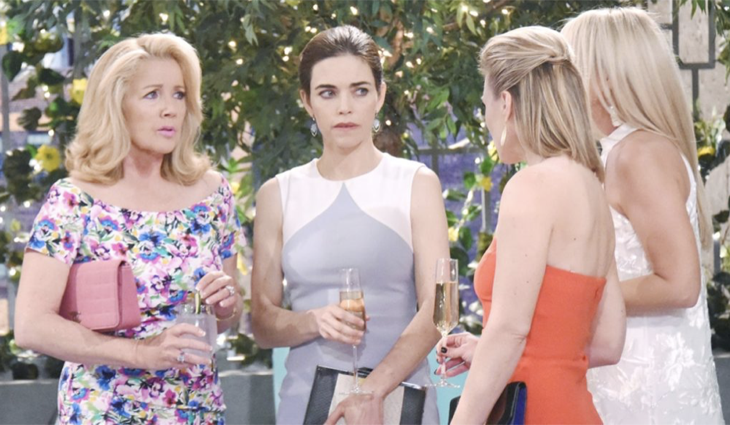 As Y&R fans learned, Rey’s arrival in Genoa City happened because the police commission wanted a targeted officer on the J.T. (Thad Luckinbill) case. Detective Rosales doesn’t yet have all puzzle pieces in place, which is why he genuinely believed that Nick is working with Mr. Hellstrom.

Both men have no idea that J.T. is, apparently, dead and buried under tons of cement at Chancellor Park. That fact will surely be unearthed at some point, but in the meantime Nick was suspected of wrong doing.

It seemed as though Nick was likely to face ongoing legal peril, which surely would have caused all coverup crew members to come to his rescue. Nikki (Melody Thomas Scott) would not have allowed her son to take the fall for J.T.’s accidental death, when she is the person responsible for it. Vickie (Amelia Heinle), Sharon (Sharon Case), and Phyllis (Gina Tognoni) would not have stood by while Nick was incarcerated for J.T.’s unlawful burial, assuming the story would have gone that far. They, like Nikki, know who handled those impulse arrangements.

Y&R created an interesting plot point in having Nick protected through immunity. Because he was, the coverup crew is able to maintain the cover story Vickie told Paul. So, for now, Nick’s mother, sister, fiance, and ex-wife remain safe.

Rey made significant progress on the understandably perceived odd absence of Luckinbill’s buried character. However, Vilasuso’s recently introduced alter ego can no longer play the new guy. He outed himself during Dark Horse’s launch party which allowed the coverup crew to gain crucial knowledge that should help them feel secure, though they’re not.

Long time soap fans likely feel an early fall, or November Sweeps climax coming. At some near-term point this storyline, that began in the spring, needs to be wrapped up. Rey appears primed to drive toward that needed conclusion.

This is Us Season 3 Spoilers: Justin Hartley Admits That He Thinks About His Character Kevin Dying

Will Days of Our Lives John Forgive Sami and Belle If Marlena Survives?